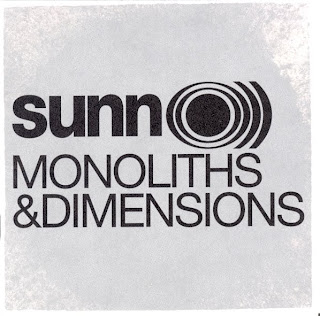 Although I don't usually write about major label releases, Sunn O)))'s Monoliths and Dimensions blends contemporary classical music with experimental metal with stunning results. Most of the press surrounding the group focuses on their loud and ritualistic concerts, with the group dressed in monk's cowls and the stage filled with fog. Concerts are fine if you live in London or New York, but here in the desert, their recordings are the only evidence one is likely to hear. Stephen O'Malley and Greg Anderson have been the core members since the group's first recording nearly ten years ago, and their albums have relied on an increasing number of guests drawn from other avant-metal groups, such as the Melvins, Earth and Boris. But on Monoliths and Dimensions, they enlist the services of a wide range of creative musicians playing acoustic instruments more commonly associated with the classical world.

Typically classified as drone or doom metal, Sunn O)))'s core is a very loud duet between detuned guitar and bass, playing more or less in unison. The sonic detritus resulting from extremely high volume and the guitar's extraneous noisy artifacts, such as the crunch on the attacks or the inadvertent vibrato resulting from reduced tension on the strings, produces long and deep resonances and interference tones that fill the space with ultra-physical waves of sound. And thus begins Monoliths and Dimensions as well, an instant assault with a deep monophonic riff, gradually accumulating subtle resonance until a brief window ushers the entrance of Attila Csihar's incantatory voice. Impossibly deep, Csihar's gutteral pronouncements seek their own cadence, deviating from normal rhythms until they sound like a new language, intoning the legend of Aghartha, the city at the center of the Earth. The "thunderous resonant clouds" that open Csihar's lyrics gradually are mirrored in the accompaniment even as his delivery remains static. Clusters from strings (violin, viola, two double basses), piano and winds (clarinet, English and French horns) swirl to a "spinning thunderous vortex", when the rock instruments drop out, leaving the music to become dissonant, watery and evanescent. Conch shells and a hydrophone replace the strings and winds, together with the amplified creaking of a rope straining under an unbearable tension.

Although Csihar continues with his intonations on the next two tracks, he is augmented by choirs, female on Big Church and male on Hunting & Gathering (Cydonia). Big Church is highly ritualized, the women wailing incomprehensible syllables while Csihar overdubs several layers of murmuring. Nothing here is intended to be understood, but the lyric sheet provides the single Hungarian compound word associated with deconsecration. Again, brass and strings back up the choir and multiple guitars. Hunting & Gathering uses only brass to supplement the male chorus and Csihar approaching as close to the blues as this album comes. Epic in scope, both of these choral pieces recall the elemental forces of Carmina Burana, adding the electronic feedback which only increases the raw power of the music.

After these two incantatory rituals, the last piece, Alice, is an instrumental affirmation that leads through chaos to an otherworldly calm and peace. Taking a cue here from the spectralist music of Iancu Dumitrescu, the guitar and bass gestures merge with a chamber orchestra comprised of brass (three trombones and French horn), strings (violin, viola, three double basses), winds (oboe, English horn, clarinet, bass clarinet, alto flute) and harp. At first, the chamber orchestra provides spectral overtones for the rock instruments, chords and gestures that start deep and electronic but swelling with the acoustic instruments into mid and upper ranges, reversing the typical resonance where the high notes fade the soonest. Eventually the trombones move to the foreground, providing their own harmony and counterpoint amidst the thickening textures while the rock instruments mark the beginnings of phrases. The final quarter of the piece is for the chamber orchestra alone (apart from Oren Ambarchi's motorized cymbal shimmering in the background), and the piece closes with a beautiful trombone solo from legendary jazz veteran Julian Priester. On its own, Alice is remarkable enough, but in its position on this album, it borders on ecstasy.

Although Monoliths and Dimensions is available as a download from the usual sources, the CD booklet has complete credits and lyrics, essential if you want to understand Csihar's vocalizations. The booklet cover is a translucent overlay on top of a Richard Serra painting, and there are some photos of the group at an Aztec temple and individual cyanotype portraits in primitive, gothic settings.
Posted by Caleb Deupree at 4:46 PM 4 comments:

My review of New Works for Processed Electric Guitar by Richard Lainhart and Hakobune is published at furthernoise.org.
Posted by Caleb Deupree at 5:55 AM No comments:

The art of listening 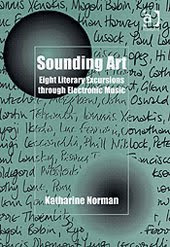 Part of Brian Eno's ambient music manifesto was that "Ambient Music must be able to accomodate many levels of listening attention without enforcing one in particular." Quite often my mind wanders during a music performance, invaded by myriad isolated thoughts from recent internal and external events. Nevertheless, either through increased familiarity or a serendipitous awakening, repeated listenings provoke new insights, perhaps because of some random mental association with some element in the piece. Books, by contrast, enforce a linearity only mildly adjusted for chapter shuffling or other superficial devices. Composer and writer Katharine Norman manages to portray successfully a scattered listening experience in her book Sounding Art, which is also one of the few academic music books that discusses contemporary musique concrète.

These written decentering strategies are quite clever. Take, for example, the two chapters on noise. The first one, after setting out a number of noise definitions (unwanted and irrelevant fluctuations in the signal, unwanted and irrelevant sonic fragments in our subconscious, etc.), mirrors the interruptions in the text, her essay intermingled with lyrics from a Sarah Vaughan blues and definitions from the OED, Foucault, Glenn Gould and Derrida. The footnotes for this essay encircle the text for the second noise chapter, making the two essays virtually impossible to read with any kind of linearity. Elsewhere, an article on Francis Dhomont's exploration of the unconscious mind, Sous le regard d'un soleil noir, is printed in four columns and needs to be read in landscape mode, and an extended interview . And the book comes with a CD with 34 examples, essential to an understanding of her arguments, but which make the reading even less straightforward.

Fun with typography isn't exactly new, although it's still unusual to find in an academic work. Fortunately, the printing devices enhance the intellectual arguments, establishing a parallel between different modes of reading and listening. Her most dazzling analytic sleight-of-hand comes using Leonardo's Annunciation and works for instruments and tape by Jonathan Harvey and Luigi Ceccarelli to illustrate a multitude of polarities: acoustic/electronic, performance/emanation, performer/tape, etc. The whole discussion turns on metaphors of flight that lead to images of other places, turning on the reversibility of metaphor, where the two poles play the role of the real and the ideal alternately. In her own contemplation of music and space, Norman cites Gaston Bachelard (also one of Takemitsu's favorite authors), whose vision of poetic contemplation went beyond any specific sounds.

Metaphorical space isn't the only listening strategy that Norman investigates. Two chapters discuss soundscapes and field recordings, making a map to the world — metaphors of travel culminate with a wide-ranging and sprawling interview with Hildegard Westerkamp on field recordings. The transcribed conversation retains the hesitations and odd subject changes that mark conversations in the wild, full of the kinds of distractions that one might encounter on a sound walk.

The more discursive chapter on field recordings starts with R. Murray Schafer's soundmarks for an extended rumination on music and maps, both of real-world destinations and inner landscapes populated with memories and emotions. It seems strange to speak of maps and nebulous personal recollections, since most maps seek to provide direction through a solid field of knowledge for an uninformed petitioner. But not all maps strive to provide such straightforward direction. Following her previous discussion of metaphor reversability, a musical map, whether or not composed from field recordings, aims for an emotional response, working around and through the listener's private pantheon of memory. The music here is the petitioner, and each listener hears his or her own direction through the monuments and events in the piece. (The mapping metaphor is further complication with the use of liner notes, essentially a story that provides a map for the musical work.) Norman uses examples from field recordings and works by Barry Truax, Paul Lansky and Francisco López to sift through mapping perspectives, all refreshingly non-academic.

Norman is also a composer of instrumental and electronic works. Her album Transparent Things has an unusual format: three solo piano works (played by Philip Mead), two works for electronics, and one for piano and tape. Many of her electronic works incorporate voices from interviews and media samples, an important disembodied layer that is also one of the important topics in the book. Her tape piece Hard Cash (and Small Dreams of Change) is available on emusic, immune as of this writing to emusic's new album pricing practices and thus available as a single track download.
Posted by Caleb Deupree at 4:40 PM No comments:

Keith Jopling over at Juggernaut Brew has a recent post about managing large and ever-growing music collections. He accurately describes the oversupply problem, and then he presents a prioritized five-category approach:
I found this list gratifying because it's fairly close to my current practice, although it's hard to quantify what's sufficiently 'different'. Jopling mentions boutique labels to explore such as Nonesuch, Real World and ECM. That's all very nice, but at least around here some music is too different to be under consideration, even for one listening.

I've written before about using playlists to manage new music, but it's always interesting to see how other people approach this problem.
Posted by Caleb Deupree at 3:30 PM 3 comments: 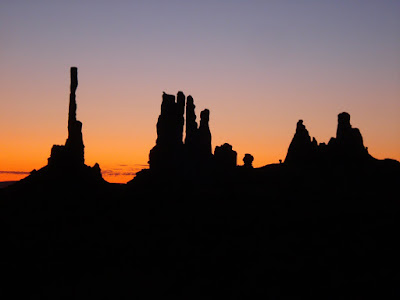 For a number of reasons, it's been a while since I posted. First, I have been writing, but for other outlets. I'll post links when the articles are available. Second, I've been struggling with a dying computer, so I now spend the first half hour or so of every session trying to get everything up and running normally. All very disheartening, but I've ordered a new one, so this problem should go away in the next couple of weeks.

And finally, we've been traveling, to northern Arizona, specifically to Monument Valley on the Navajo reservation. The best way to see this massive series of rock formations is in a jeep, and there are a number of companies who will take small groups out. Although there is a road that goes through the park, I wouldn't take anything less than a four-wheel drive vehicle on it, and in addition there are vast sections of the park that are closed to vehicular traffic except for the licensed guides. We took two tours, including one at sunrise where I took the picture at the beginning of the post.

Posts about music will return, real soon now.
Posted by Caleb Deupree at 10:54 AM No comments: