With sadness I note the passing of Maryanne Amacher, a sound artist whose work impressed me the first time I heard it many years ago. She will no doubt be best remembered for her massive multi-room installations, which she populated with "sound characters" whose interaction she considered in narrative terms. Sadly, I never had a chance to hear any of these, but her recorded work is very powerful on its own terms. The installations defied documentation on record for decades, but some of her work started appearing on compilations in the mid-1990s, notably the Asphodel Sombient Trilogy. Eventually John Zorn persuaded her to release a solo CD on Tzadik, Sound Characters (making the third ear), in 1999, followed by a second one almost ten years later, Sound Characters 2 (making sonic spaces).

The aspect of her work that initially attracted me was a phenomenon known as otoacoustic emissions, where the inner ears generate additional tones to what comes out of the speakers. Even on a home stereo (heck, even on a car stereo, the only listening location at the time with sufficient privacy), my ears bristled and quivered, unlike anything I had experienced before or since. Several passages on her Sound Characters exhibit this phenomenon, which of course relies on sound circulating in a space and is thus completely absent on headphone listening. Sound Characters is a sort of compilation album, containing material from a couple of different installations as well as some piece apparently composed just for the CD. Sound Characters 2, on the other hand, is a documentation of one installation, at the outdoor plaza of the Palacio de las Bellas Artes Museum in Mexico City, presented as a complete narrative. While the liner notes for the first CD follow the typical Tzadik six-panel standard, there is a sixteen-page booklet with the second, complete with photos and diagrams and several essays about the installation (although you might need a magnifying glass to see much in the diagrams). Both CDs are still in print, and it's been a pleasure to hear them again.

Her wikipedia page has already been updated several times since her death yesterday, and someone has already started an online archive to document her work. The only real obituary I've seen so far is from the Chicago Reader, and Kyle Gann also has a nice remembrance of this singular and amazing artist.
Posted by Caleb Deupree at 4:28 PM No comments:

The road to Paradise 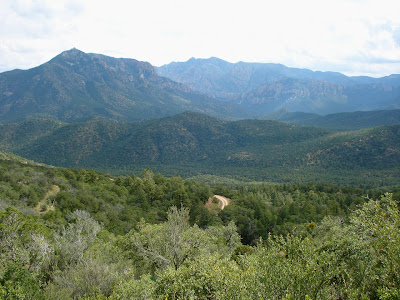 Another photo from our road trip last week. There actually is a very small town in Arizona called Paradise, and we took the one-lane dirt road across the Chiricahua Mountains to get there.
Posted by Caleb Deupree at 2:54 PM No comments:

The Sound of Love 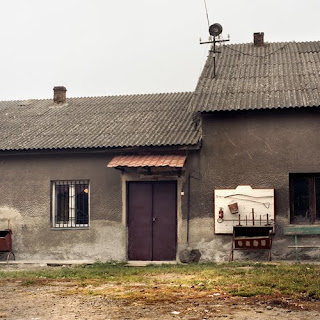 If music contains the power to evoke our emotions, what is the sound of love, the most fragile and most sincere of emotional states? Celer's brief but prolific musical trajectory circles this question, adopting a mystical perspective towards living and working through a fragile existence. Their recent CD Brittle was recorded last winter but released just a few weeks after Danielle Baquet-Long's untimely passing in July. Their source material is all acoustic instruments — piano, violin, cello, harpsichord, whistles — but connections between individual sounds and their origins are as fragile and tenuous as the emotions they seek to describe.

Western music is based on a model of tension and resolution, an establishment of expectations and the delayed gratification for the ultimate cadence. But Brittle is carefully constructed to remove all traces of conflict and difference. Even when their individual sounds combine into consonance or dissonance, nothing is ever established as a home base. Even when a pretty chord rolls around, there's no function, no direction, any more than when the elements of a mobile drift into a pleasing shape. Sounds are pure, without attacks, drifting and of long duration. The listener quickly turns off expectations, dismantles the entire cultural listening apparatus, and bathes in the music's warm glow.

The program notes for Brittle outline some of Celer's always interesting working methods. Their drifting ambient music is an outgrowth of using open forms, creating small pieces that combine in various ways to create a larger work. Nacreous Clouds, their 2008 release on and/OAR, was composed of 37 short tracks that encouraged shuffle mode, creating a different listening experience each time. Brittle shares the earlier album's sound world but is one long track that was originally comprised of many smaller fragments. One imagines that the resulting piece is one of several possibilities, that in a parallel universe the Brittle release would have been sequenced differently. But where Nacreous Clouds displayed its seams, little moments of silence between each track, Brittle is a continuous stream of music, and the nineteen separate tracks that lie at its origins are completely erased, blended into a complete unity.

The normal musical vocabulary is insufficient to describe Brittle, so a reviewer struggles to find appropriate metaphors. Perhaps like fire light, the music is always moving, always flickering, never settling into a constant sonic wash. Or like the water in a mountain stream, moving over rocks, a continuous variation of sound, light and shadow. By removing musical landmarks, Celer demonstrates the fragility of existence, and Brittle becomes an environment for meditation and prayer. The peaceful work completely merges with its environment with nearly three minutes of room ambience, subtly framing the delicate sounds that have preceded, leaving the remaining music solely in the listener's imagination.

The disc itself is adorned with a quotation from Rainer Maria Rilke's Book of Hours, and the gatefold wallet cover includes an brief, elegiac essay. It is available directly from Low Point, from Celer's shop Floor Sugar, and from a great source for Celer recordings, Infraction Recordings.
Posted by Caleb Deupree at 1:48 PM 2 comments:

There's a lot of activity in the blogosphere about new FTC rules for disclosure, which take effect December 1. Although the rules are targeted at larger fish than the micro editions that appear in my posts, I believe full disclosure is generally a good idea. So here's mine.

Through my activity as a reviewer for furthernoise.org, I occasionally get unsolicited promotional materials, usually CDs but occasionally vinyl (which, for the record, I can't play) or downloads. Presumably record labels send out more review CDs than they get reviews, because I get more CDs than I can review for furthernoise.org's publication every two months; the remainder are reviewed here as time permits. Sometimes artists contact me via email, either from furthernoise.org, mailing lists where I hang out, or through this blog (I'm never sure which) and ask whether I would be interested in reviewing their material; sometimes but not always I accept. Most often I write about albums that I purchase with my own funds, the stated goal of this blog from its alpha post. In the future I will add the label "promo" to posts indicating that I received the music for promotional consideration, and as time permits I'll add the same label to past reviews. Note that all of the reviews I've published in furthernoise.org were promotional CDs or downloads.

I have never received a promotional copy of a book, although my Bruford article a while back prompted an offer from another rock biography publisher (which I declined). I'd like to say that I've bought every book I've reviewed here, but most of the academic ones are very expensive, fortunately available at the University of Arizona's music library.
Posted by Caleb Deupree at 8:48 AM No comments:

Maps and a stronghold 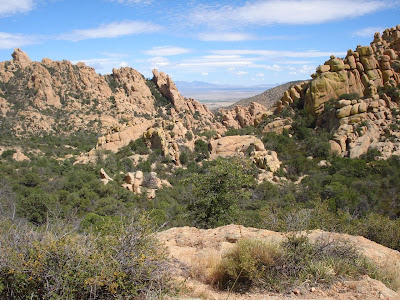 Katherine Norman's book on sound art, which I wrote about a month or so ago, prominently featured maps as a tool for personal discovery. I have always loved maps, even as a kid, poring over atlases and letting my imagination wander. I still collect maps, using visits to the local outfitter as an excuse to find some other representation of the surrounding regions. Surprisingly, they disagree on road surfaces, sometimes even on locations, and the names for the obscure back roads seldom match what's printed on paper. And when it comes to trails, printed information can be little more than recollections. We visited one trailhead that stated specifically: no commercial map had been redone since a devastating fire in 1994, suggesting that a genteel trail hike could migrate into a bushwhack around any corner.

Our move to Arizona opened a whole new field of possibilities. Locations on maps evoke murky historical events whose cultural accumulation is overlaid with hundreds of western movies, moving whatever tenuous historical fact into the realm of image and myth. One of the first landmarks that captured my attention here was Cochise Stronghold, a pass through the Dragoon Mountains where the Apache leader held out for many years, able to escape to the east or west as circumstances dictated, and commanding a long range view of the surrounding plain. Like the Chiricahua Mountains, the next range to the east (and named after Cochise's tribe), visible in the photo above some fifty miles away, the Dragoons are loaded with breathtaking rock formations. I've been a bit intimidated to visit the stronghold because some sources indicate that four-wheel drive is required, but since we've traded our completely impractical convertible for an SUV, earlier this week we finally decided to check it out.

We can report that the roads to the stronghold, at least from the east side, are paved almost all the way, with just a few miles of improved dirt road to a campground at the trailhead. Although even a week ago we still had temperatures over 100 degrees, autumn has finally arrived to southern Arizona, so we had a most excellent hike to the top of the pass.
Posted by Caleb Deupree at 3:58 PM 2 comments:

My article on Toru Takemitsu's visionary graphic score Corona for Pianists has been published at Néojaponisme. I had originally intended to post it here since it dovetails with many of my recent posts about open form, but it overlaps nicely with Néojaponisme's interest in creative endeavors outside of established genres.
Posted by Caleb Deupree at 5:06 AM No comments: