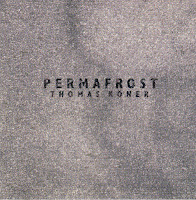 In the winter of 1994, I took a winter vacation out of Ohio to sunny Scottsdale Arizona, where my parents had retired. One of the reasons I loved coming to the Phoenix area was that just down the road in Tempe was Arizona State University, which had a wonderful Tower Records store. Before the trip, I picked up a copy of the Wire magazine that had their annual review of the best records of 1993, and used that compilation as my shopping list for the trip. This was the year that Bjork's Debut album made the top of the list, but clocking in at number 28 was a record by Thomas Köner entitled Permafrost. Despite its release on an obscure (and now defunct) Dutch label Barooni, Tower on University had a copy. I bought one, having no idea what to expect.

Well, that's not quite true. I expected something audible. Remember, this was 1994, more than a year before Bernhard Günter started his Trente Oiseaux label, which brought extremely quiet electronic music more into the relative mainstream. I remember bringing the record home and putting it on, then wondering if I had turned the sound off. What the hell is this? Nothing in my listening or performing experience had really prepared me for this album. Even Morton Feldman, who made very quiet music acceptable in the classical world, was relatively unknown, his landmark works not yet widely available (none of his late works were ever released on LP). I had some of his early scores, but Feldman's early piano works are more pointillistic, like Webern, certainly nothing like these quiet drones that I had before my ears.

Six tracks, 38 minutes, and it sounded like there was one long bass note per track. For some reason, despite my initial misgivings, I kept returning to the album. Each track has a restricted number of elements that it sets in motion, each one moving very slowly, such as a single synthesized chord that fades in and out, or a slow undulating trill. Everything is wide open, with lots of high overtones in a bath of ambient white noise. The tracks are all named after features from glaciers and the frozen parts of the world (e.g., Serac, Nival, etc.). A stereotypical image of the frozen north is without features, and Köner's album translates this image into sound, with no sharp edges to provide any sense of distance or destination, where the senses are heightened and even the smallest sound becomes an event. His frozen works are an embodiment of Jonathan Kramer's vertical time, which Köner considers a "gift within our concept of a world that is constantly losing time."

I eventually got almost all of Köner's solo albums. He released four albums on Barooni before moving to the ultra-trendy electronica label Mille Plateaux for his 1998 release Kaamos (MP also reissued Permafrost and another Barooni album, Teimo, as a two-CD set). All of the Barooni albums as well as the long work Daikan cover similar sonic territory, charting quiet and vast soundscapes. He also formed, with Andy Mellwig, the seminal Chain Reaction "subaquatic dub techno" group Porter Ricks, releasing a number of 12-inch dance singles and eventually a couple of compilation albums. The muffled beats show up in some of his later work, especially on some of Kaamos, but even so, the sound world is still fairly bleak.

More recently, his solo work has been more videos and multimedia installations, some of whose soundtracks are collected on the double CD Zyklop, released in 2003. These are considerably more noisy than the frozen soundscapes of the Barooni years, with car horns, distorted voices, and deranged clocks participating in the overall disorientation. Even though Köner's music is often too quiet for a vinyl release, he did put out an album, Unerforschtes Gebiet (Unexplored Area), from an installation based on sounds from a blank piece of film. When the album was later released on CD, it included a bonus track, Les Soeurs Lumières, which included readings on top of his music. The recording on the readings is so clear it sounds like the people are in the room, a significant and startling divergence from his more immersive music. He performs occasionally with Asmus Tietchens under the moniker Kontakt der Jünglinge (a pun on two of Stockhausen's most famous electronic works), and a number of their performances have been released on CD, which I'll discuss in a separate post one of these days.

Köner's solo CDs have fallen into some kind of electronic distribution limbo. Like Barooni, Mille Plateaux is also defunct, and for reasons that I can't explain, some of its albums are available on emusic, and a different set of albums is on iTunes. From two of the original Mille Plateaux releases, Daikan is on iTunes, and Zylkop is on emusic. Permafrost, even though it was released at one time on Mille Plateaux, isn't currently available anywhere (as of this writing, there's a used copy at Amazon going for $195!).

Köner's web site has complete information on his discography and installations, and includes a link to a brand new piece of net art, released this month.
Posted by Caleb Deupree at 3:58 PM

I remember a similar initial listening experience with Sachiko M... "Is this on?"

Köner's Aubrite used to be my benchmark for woofers: whether they could make the walls shake. More recently, I've noticed downright eerie results with Elemental II by Eliane Radigue (on which someone plays electric bass--sorry can't remember his name--but it's unusual, in that Radigue's recordings are nearly always of herself unaccompanied on ARP).

When I play Elemental II, the woofers vibrate so far forward from the speaker cabinet, it looks as if they're going to hover & then fly away. The sounds are more felt than heard.

Your overview of Köner's work is appreciated. I'm playing Unerforschtes Gebiet frequently; it still feels "new" though it came out in 2003. I'd read how--in this instance--his source involved film projectors and dust, as opposed to the usual close-miked gongs. If the resulting timbres are significantly different, it's not obvious to me. No matter; I enjoy all of it.

Only today I've first stumbled on the site: a bit surprising given my interest (my e-mail username has been a variation on "drone" for more than 10 years now). Not that I listen only to drone music, but you could say it's my specialty (as a listener).

At one time I was working on a site for reviews of drone music--charged with hope, I bought a domain name (now defunct)--but soon realized I could find only a few different words to describe all my favorite recordings. They don't sound alike, not to me: though it's a common complaint of many who've briefly overheard this sort of thing from my desk's CD player: "that's not music," or "why don't you just listen to the refrigerator?" Unfortunately these works do sound awfully similar when I try to describe them.

The above comment signals the re-release of Permafrost on Type, part of a three-CD set. It's great to see these works available again.

I think Forever drone summed it up. You need a top Hi-Fi. Or some great headphones to really get Koner's genius. The sound of the arctic ice shelf resonating like a tuning fork.