Drone classics — Trilogy of the Dead 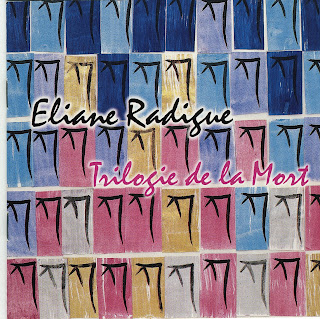 French composer Éliane Radigue is an anomaly in any enumeration of drone artists. A generation older than most and with a background amongst seminal French electroacousticians, Radigue worked with feedback and tape loops during the 1950s and 1960s with a group of works that are either lost or otherwise unavailable. Although some of these works were quite noisy, her 1971 work Chry-ptus uses two loops which are played up to a minute out of sync, creating acoustic beats and other sonic phenomena. A recent release of this work is on two CDs so the listener can make his or her own versions, plus the original 1971 version and a more recent one from Giuseppe Ielasi.

A third version of Chry-ptus is available through the Other Minds archives of a program originally broadcast in 1980 on KPFA, Berkeley's community radio station, including an interview with Charles Amirkhanian and a performance of her extended work Triptych. In the interview, she says that she is working with time and its perception, bringing sound material from one state to another with a little abrupt change as possible. This thematic has dominated her work since the mid-1970s, culminating in her masterpiece for tape, Trilogie de la Mort (Trilogy of the Dead), a three-part work premiered in 1988, 1991, and 1993. The first part was released on CD in 1991, and all three parts were released as a set on CD in 1998. Ten years later, it's still in print, on Phill Niblock's XI Records.

There are other aspects of Radigue's work besides history that set it apart from other dronemeisters. First, Trilogie de la Mort is program music, with a guide to the movements published in the booklet that accompanies the release. The first part, Kyema, has six sections corresponding to the six bardos, or realms of existence, described in Tibetan Book of the Dead (the Great Liberation through Hearing). Although Radigue doesn't provide any specifics about where the sections begin, I can detect a number of transition points and significant differences in the music that would correspond to the Bardos. Kyema has a number of relatively chaotic sounds, sometimes almost symphonic in scope, which might correspond to the wrathful deities of the sacred prayers, or perhaps the abandonment of grasping, yearning and attachment that comes with the moment of death (described in the fourth Bardo).

The second wing of the trilogy is Kailasha, representing a sacred pilgrimage around Mt. Kailash in Tibet, considered as a path to other spheres of existence. At first listen, Kailasha sounds the most consistently quiet and peaceful of the three pieces, but contains a nearly continuous low frequency throbbing nearly until the arrival point at the end of the piece. The calm is deceptive, and hides a great deal going on in the lowest frequencies. Radigue says that this is the most chaotic of the three because of the "wild bass sounds."

Given Radigue's conversion to Tibetan Buddhism in the mid-1970s, it is somewhat of a surprise to see that the program for the final part of the trilogy is based on Christianity. There are four sections here, each identified with a quotation from a Christian text. I'll note in passing that the quotations wouldn't pass muster in an academic setting — a passage from the Dies Irae is incorrectly identified as from the Requiem Mass, and a quotation cited as from Psalms 37:4 reads more like a verse from the Bardo ("Certainly man is walking among only appearances"), and is completely different from anything in Psalm 37 in my Bible. The other two quotations are from 1 Corinthians 15:55, "O Death, where is thy sting?", familiar to every listener of Handel's Messiah, and from the chorus of section 27b of Bach's St. Matthew Passion. In addition, an epigraph on the CD's back cover is from Christian mystic Thomas Merton, again citing a work that I have been unable to locate. Despite the somewhat questionable source references, the theme of the final wing of the trilogy is rebirth from the ashes, and, as with Kyema, the work divides itself into major sections that might coincide with the program. After a peaceful beginning of a low drone with some amazing mix of overtones, a Phoenix reference of a rebirth from ashes suggests itself, bringing to mind on a great mythological monster guarding the gates of life that quietly returns to its lair, leaving a heartbeat pulse behind, and a return to the peaceful calm with which the movement began.

In addition to the program music, the other major difference from her contemporaries is that Radigue works (still!) primarily with an analog synthesizer, the Arp 2600, rather than digital sources. Drone artists like Jonathan Coleclough, Thomas Köner and Michael Northam work with sounds that cross the entire noise spectrum, incorporating all kinds of white noise from environmental recordings. Kyema has a purity of tone, perhaps analogous to the elimination of distractions that is a key theme of the Bardo prayers on which the work is based. Radigue mentions in the CD booklet how difficult it was to make digital masters of these three pieces, especially the bass frequencies in Kailasha. But there are noisy passages, such as the ones already noted in Kyema. In Koumé, the climactic passage sounds like buzzing insects or crashing cymbals combine with choirs and trumpets blasting, with everything accompanied by a deep rumble. Since each of the three pieces begins quietly and with a fairly consistent low drone, it is easy to be lulled into a blissed out or meditative state, especially if one listens on headphones. But at higher volumes and over speakers, the sound changes dramatically depending on the listener's position in the room.

As I mentioned above, the three-CD set of Trilogie de la Mort is still in print and available from most decent music outlets. It's also available on emusic, a steal given that there is only one track per piece. The booklet accompanying the CD release contains the program notes and essays by Tom Johnson, Claude Mettra and David Behrman, everything in both French and English.
Posted by Caleb Deupree at 3:36 PM