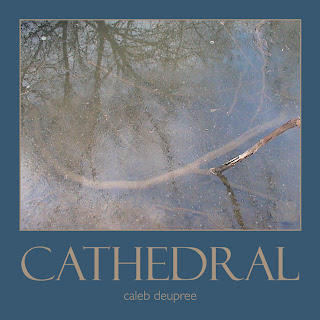 Last spring, the netlabel Webbed Hand released a String Ambient compilation that included an excerpt of Cathedral, a drone piece I made a few years ago almost entirely from piano samples. Today the netlabel Treetrunk has released the entire 20-minute piece, available for streaming or download at the Internet Archive.

If you're not familiar with Treetrunk, it's run by Thomas Park, the primary musician in the project Mystified. Among the fine releases on the label are several variants on the Constant theme, a series of long-form drone pieces using a "less-is-more" approach. Among the artists who have released Constant albums (which have appeared on Webbed Hand, the TZP Drone Company, and the Drone Download Project as well as Treetrunk) are Mystified, Stephen Philips, and Phillip Wilkerson. Fine drones all, and well worth checking out.
Posted by Caleb Deupree at 1:59 PM 4 comments:

The latest issue of furthernoise.org has my review of two Richard Lainhart albums: a reissue of his early work White Night, and his most recent release, The Beautiful Blue Sky.
Posted by Caleb Deupree at 6:05 AM No comments: 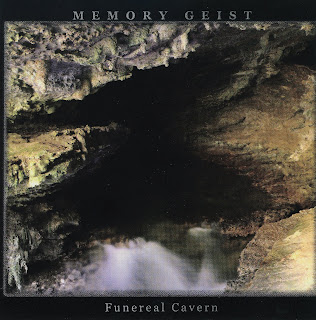 A couple of years ago, two electronic musicians from the opposite sides of the planet met on an internet electronic music forum and decided to trade some music files and see what happened. The result is Memory Geist, produced by Steve Law from Melbourne and Bakos Sirros from Athens, both of whom have extensive resumés and myriad musical projects. Memory Geist's first album, Funereal Cavern, was released last year on the long-standing Italian label Musica Maxima Magnetica.

Although much of the duo's solo work comes from the dance floor, Memory Geist takes its inspiration from a somewhat darker ambience. Long-form sounds sweep across the sound pallet, underpinned by deeply resonant bass drones. Abstaining from the clichés of the genre (such as creepy voice samples or massive reverberent percussives), overall the album is much more peaceful than many of its contemporaries.

The album's three tracks blend into each other while retaining their own separate identity. Shadowy Periphery functions almost like a preview for the rest of the album, a short sketch with filtered sweeps and long resonant bell tones. Much shorter than either of the other two tracks, about half way through it introduces a slow, metallic rhythm whose echo will be taken up later on. Deepest Reaches continues the sweeping sounds, but incorporates a slow, patient melody that meanders through nearly the whole twenty-minute length of the piece. Little insect sounds like crickets add to the nocturnal character, and Sayaka Yabuki's wordless vocals add an ethereal texture, blending seamlessly into the various electronics. Tiny percussive sounds characterize the half-hour-long title track, mutating from quiet bird-like chirps to a more organic, watery ambience. Gently moving sustained sounds predominate, with large swells increasing to the occasional large roar, becoming expansive and shimmering as subliminal subterranean waves roll through. The metallic rhythm from Shadowy Periphery reappears a couple of times, including a slower variant near the end as the music becomes progressively quieter.

Professor Gann has a recent post on compositions that freely give their beauty to listeners, right on the heels of his keynote address at a new music festival where he cites Jonathan Kramer's The Time of Music in connection with the Absolute Present in music. Kramer's book is the first theoretical book that I've read that discusses drones, one of my favorite books, as I've mentioned before. But in addition Gann's post on beauty encapsulates one of the reasons I like drone music so much. The best drones (and the best ambient music generally) provide so much beauty that I feel like I'm wallowing in it. And for all of my inquiring into the elusive whys and wherefores of music, the search for beauty, calm and peace that I get from listening and performing remains one of the constant joys.
Posted by Caleb Deupree at 6:29 AM No comments: 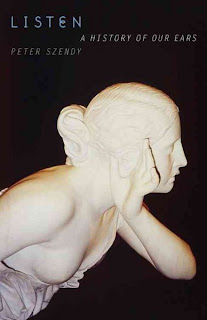 Recently I stumbled across Peter Szendy's Listen: A History of our Ears through a recent interview with the translator, Charlotte Mandell (worth reading in its own right). His sensuous book inquires into the rights of listeners, who has the right to music, and what a listener can do with music. The discussion leads from the evolving history of copyright to arrangements and finally to different types of listening.

The historical context for copyright, when the publishers were faced with performances on mechanical instruments such as barrel organs or music boxes and, eventually, player pianos, makes for some interesting openings to contemporary practice, with its widely varying degrees of artistic control of listening behavior. For an extreme but current example, the rock band AC/DC won't sell their recent album on iTunes because they don't want users to purchase (or probably even listen to) single songs outside of the album's context. Contrast this attitude with David Byrne and Brian Eno, who made all of the multitracks available for two songs from their landmark album My Life in the Bush of Ghosts. It has become commonplace for recordings to contain instructions for listening, most typically that several copies should be played simultaneously (e.g., Boris's Dronevil or Zaireeka by the Flaming Lips — respectively two and four synchronized CDs to be played simultaneously; or Charles Curtis's Ultra White Violet Light and Bernhard Günter's two Monochrome albums — both with four tracks that may be freely combined).

But computer music management and freely available audio software have democratized listening behaviors. Listeners create and publish playlists and mixes, with varying degrees of Big Music approval. Respected reviewers like Vital Weekly's Frans de Waard admit to normalizing ultra-quiet albums like Francisco López's Untitled #150 in order to make them audible. Szendy writes about John Oswald's "manipulative listenings" that resulted in his banned Plunderphonics CD (although failing to note that lossless music files are available on Oswald's site, on a strictly not-for-sale basis of course). Every serious listener can compile examples from his or her own experience.

From the use of recordings as source material for new compositions, the next logical step is an arrangement of a piece of music for different instrumental forces. Szendy calls arrangers "listeners who have written down their listening" and uses Walter Benjamin's rather esoteric essay on translation as a prism to view Liszt's and Wagner's arrangements of Beethoven's symphonies, and Schumann's and Busoni's writings on arrangements. I won't try to summarize Benjamin's thesis — I'm not sure I can. Szendy's discussions of the nature of a musical work tie in with Lydia Goehr (whom he cites), but he puts a terminus on the value of arrangements with Schoenberg (who vehemently rejected Busoni's concert arrangement of one of his opus 11 piano pieces), without taking into consideration the plethora of arrangement types that we have today. He mentions Monk listening to Ellington, but surely jazz explores arrangement types and attitudes in detail (Coltrane and Richard Rodgers? Miles and Cyndi Lauper?). What is the relation between songs and their covers? And still within the western art music tradition, how about open works? How does a realization differ from an arrangement? Clearly composers like Feldman had an image in their mind when they composed open works, so the idea of the Work existing outside a given performance is as strong today as it was for Liszt and Beethoven.

But we might say, along with Adorno (with whom Szendy's book closes) that pop and jazz are entertainments, representatives of a fallen listening and a degraded notion of a musical work. An expert listener grasps all of the past, present and future moments into a "fully adequate mode of conduct [that] might be called 'structural hearing.'" Szendy traces the development of this attitude, from Mozart through Schoenberg (again), showing its history with the implicit contingencies, leaving listeners with the ability to select from different modes of listening based on the time and the work.
Posted by Caleb Deupree at 2:02 PM No comments: