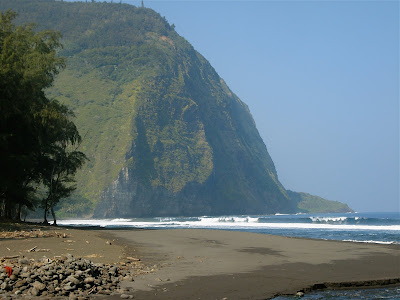 Because it's not Arizona. We've come across the water to the 50th state for the holidays. Not only is it green, an unusual color for a landscape, but it's extremely humid (as you can see from the haze — that cliff isn't very far away from us). But while we're here, music posting will be non-existent, and other access will be limited. Have a good time celebrating whatever you celebrate, and I'll see you again in 2010.

The picture is from the beach at Waipi'o valley, a sacred site for Hawaiians.
Posted by Caleb Deupree at 7:12 PM 1 comment:

Stockhausen's intuitive pieces, From the Seven Days, are more than historical oddities; they continue to interest creative musicians and spur new perspectives. In February 2009, a group of five improvisers whom I've discussed before, including Werner Dafeldecker (of Polwechsel and Autistic Daughters) and Kai Fagaschinski (Magic I.D., among others) performed the most severe of the set, Gold Dust, at a conference on music and poverty, and a recording has been posted at the conference web site. Gold Dust asks the performers to fast and live in silence for four days, then play single sounds without thinking and without conversation beforehand, which the organizers related to the overall theme of the conference. There's been some discussion of this piece at IHM, and the recording is very well done.

Another of my ongoing topics, John Cage, has also been the subject of recent activity. Fellow blogger DaveX of Startling Moniker mostly performs in the radio booth, but he was persuaded to participate in a Cage festival at Southern Illinois University with premiere of Cage's piece Knobs, originally published in the liner notes of the Nonesuch LP of Cage and Lejaren Hiller's HPSCHD. He wrote up his experience here.

And finally, via the Silence mailing list, here's a recording of one of Cage's last works, Four 6, a recording from a concert in Greece devoted to Cage's work organized by Dionysis Boukouvalas. One of the number pieces that Cage composed toward the end of his life, this one leaves the choice of sounds completely open; each performer chooses twelve different sounds with fixed characteristics, which are played within flexible time brackets. Boulouvalas doesn't specify who performed what, but I hear various percussion sounds, an accordion, and a sax. There was a nice album this year that included four British improvisers performing Four 6, to which this recording is an interesting foil. Both Four 6 and Gold Dust demonstrate the dissolving boundaries of classical and improvisational music, and recordings like these ensure that the music stays alive.
Posted by Caleb Deupree at 5:59 AM 5 comments:

What drone musicians do when they're not droning 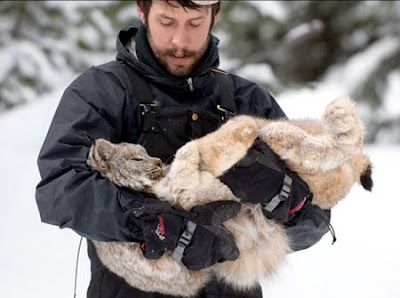 A couple of weeks ago I wrote about a Sun Circle concert, featuring Greg Davis and Zach Wallace. One of the albums I picked up at the concert is Wallace's Glass Armonica, a live recording of an instrument he built based on Benjamin Franklin's design. It's a very nice set of drones, played by four performers, emphasizing the unique set of overtones that come from working with glass. But besides playing mizmars and constructing glass armonicas, Wallace also works with a team on one of the most comprehensive field studies of the Canadian lynx. There's a fascinating article and slideshow here (hat tip: Root Blog).


The photograph of Wallace and a tranquilized lynx is by Ted Wood and is taken from the Nature Conservancy slide show linked above.
Posted by Caleb Deupree at 8:26 AM No comments: