The Hafler Trio is one of the longest running creative electronic musical acts. The group formed in 1982 with Andrew McKenzie, Chris Watson (formerly of the punk-dada group Cabaret Voltaire), and a possibly fictional third member, a scientist specializing in perception, Dr. Edward Moolenbeek. I found them through their association with the Touch label, for whom they released several works in their first decade of existence. In the early 1980s, Touch was primarily a cassette magazine, with its odd, exotic and powerful compilations centered around ritual, fantasy, and music from other cultures. The music at that time was a bewildering amalgam, deliberately provoking perceptual fragmentation, but already approaching the mysticism that would become their hallmark in more recent years. This period of their work culminated in the two-lp set A Thirsty Fish, released on Touch in 1987 and finally reissued on CD in its complete form by Korm Plastics in 2005.

By the time of A Thirsty Fish, McKenzie was the sole member of The Hafler Trio, a situation that remains to this day. He continued to work against perceptual stereotypes, and started producing the long form works with beautiful and unusual packaging that have become characteristic of his recent efforts. In the early 1990s, he produced (among other releases) a trilogy of albums that included Kill The King, Mastery of Money, and How To Reform Mankind. Each work was packaged in an oversize wallet, and included various photos and booklets in addition to the CD. The perceptual issues were still ever present, which even extended to the track layout. Mastery of Money, for example, contained seven pieces, but 34 tracks, sandwiching 32 extremely short tracks (between one and three seconds in length) between two extremely long ones (46:34 and 27:50 respectively). This track layout was not repeated on the recent Korm Plastics reissue, which followed a more typical layout of one long track for the entire album.

By the late 1990s, his output had slowed, perhaps because of health problems that he announced in 2002, combined with immigration problems as he moved through Denmark, Russia and Iceland (his current residence is in Estonia). He attempted a very expensive vinyl series (seven 10" records that sold for around $75 each), but his only other new releases were documentation of a live event and an installation that took place much earlier. All of this changed around 2002, when he returned with a number of multi-disk releases. The first to see the light of day was a trilogy, released in 2002 and 2003, that was a harbinger of what would follow: elaborate packaging with wallet cases, beautiful white envelopes with silver borders, all enclosed in thin tissue paper. The second extended outing, released in 2003 and 2004, was even more elaborate, two three-CD sets called How To Slice a Loaf of Bread, combined with a third item comprised of two CDs and a DVD documenting its live performance. Amidst other short releases on a variety of media, he has recently embarked on a series of works whose sole sound source is the voice, which brings us to the work under discussion here.

His collaborators on the voice projects that have been released to date include David Tibet of Current 93 (Where Are You?, one CD), Blixa Bargeld of Einstürzende Neubauten (Normally, two CDs), and Jónsi Birgisson (Sigur Ros), with whom he has released three two-CD sets, which I think of as the Exactly trilogy: Exactly As I Say, Exactly As I Do, and Exactly As I Am. 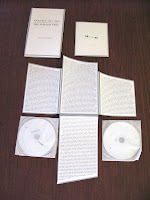 All of the voice projects have identical, elaborate packaging: an oversize wallet with the title and attribution on the front cover, along with a brief epigraph from an author associated with mysticism (St. John of the Cross, Rainer Maria Rilke, Milton, Meister Eckhardt, and Sri Ramakrishna), which folds and closes in the back with an unusual diagonal cutout; a four-panel fold-out printed on both sides, containing one panel of credits and seven panels of very short unattributed quotes (his web site displays these like titles of individual tracks, but such subdivisions of the works as they appear on disk are not evident to me); and a large irregular shaped cruciform sheet that folds out to display eight panels containing somewhat cryptic and surreal prose. The panels are unnumbered, which presents a certain free-form nature about where to start reading, but the last page is known by the presence of a signature block and the fact that it is printed in reverse, so that an ordinary reader must hold the page up to a mirror in order to read it.

Finally, the titles of each disc-long work are Sanskrit words, pointing perhaps to an interest in Hindu mysticism. Exactly As I Say's two discs contain Para Bindu (the all-encompassing point that contains the unified consciousness and its manifestation) and Diksha (the ritual of initiation into the worship of a deity). Exactly As I Do's discs contain Shaktipat (the ritual of a guru conferring power to a disciple) and Asis (I couldn't find a reference for this one, but I'm sure it's out there). And Exactly As I Am's discs contain Sam-Dhana (a spell for joining, uniting and healing) and Vi-Parita (the Sanskrit word for inverted, or upside-down).

This elaborate and attentive packaging is merely an introduction to the sounds of the Hafler Trio, which have since its reintroduction in 2003 have been composed in large part of gorgeous, resonant drones. McKenzie isn't the first avant-garde artist to become interested in the voice as a sound source — John Duncan, who collaborated with McKenzie several years ago, has embarked on his own long-term project using voices as sound sources which deserves its own discussion.

Vi-Parita and Diksha are primarily episodic, at least in the sense that they contain a number of shorter gestures separated by silence. There is a long section in the middle of Diksha where sustained sounds form a backdrop to slow pulses that could originate from breathing. A subsequent section is also composed of sustained sounds, but it's relatively active, almost melodic. There's a short gesture, like a sports whistle, that appears in a couple of places in the piece, as if to signal some kind of transition, and the piece concludes with a long static section, similar to the drones in the other works. Perhaps the best way to describe the episodes in Vi-Parita is subdued. For the most part, it's a very quiet piece, similar to the calm in a quiet field. The backdrop is a gentle murmuring, with periodic swells coming in and out of consciousness. Vi-Parita concludes with a quiet, but deeply resonant, sustained drone.

Shaktipat is a more drawn out affair. The voice isn't much in evidence here, except as background during the fade in. The main characteristic of Shaktipat that sets it apart from the others is a rhythmic deep rumbling, perhaps sourced from ordinary speech (as opposed to a chant or sustained vocal sounds). Similarly, Asis is a continuous sustained sound throughout, but the sound has a fluttering quality that is present only on this track.

The two pieces which are closest to pure drones are Para Bindu and Sam-Dhana. For long periods, Para Bindu is about as static as music gets. The voice is recognizable through much of the piece, which consists of a continuous, very slowly evolving, wordless 'ah'. There is a high overtone present, similar to the high tones one might hear in certain kinds of throat singing. The fundamental underneath changes ever so slightly, and only once or twice in the piece is there a visible seam where different sounds fade in and out. Sam-Dhana is perhaps the quietest of the lot. Like Para Bindu, it is composed of long sustained tones and takes a long time to build. But there is a slow, deep throbbing underlying most of the piece, whose tones accumulate to a deceptively peaceful harmony. About two thirds of the way through the piece, an upper voice raises itself out of the mix like a tocsin. Although the overall pace of the work doesn't really change, there is an urgency for a few minutes around this point before the energy dissipates and the work concludes.

The Hafler Trio has a couple more albums based on voice in the works, using artists like Bruce Gilbert (from Wire) and Michael Gira (Swans). With the attention to detail that comes with these, and all Hafler Trio releases, it should come as no surprise that no Hafler Trio albums are available on emusic or iTunes. McKenzie generally doesn't even permit short sound samples to be posted at vendor web sites, and his own site at Brainwashed doesn't contain any samples either. With all of his work, McKenzie exhibits an integrity that is becoming all too rare in much of the music world. I find the Hafler Trio's music to exhibit a remarkable staying power, consistently rewarding while so much music is so highly disposable. Integrity — Exactly.
Posted by Caleb Deupree at 7:50 AM

hallo Mr DEUPREE:
very nice website.
I'm very familiar with all the albums you're quoting and I found your analyse effective and accurate.
I've also noticed that Mr.Taylor Deupree seems to be part of your family as well. He's one of my favorite musicians and I own almost 95% of the 12K and LINE catalogue.
I will frequently visit your site as a common ground for beautiful sounds

with my best regards