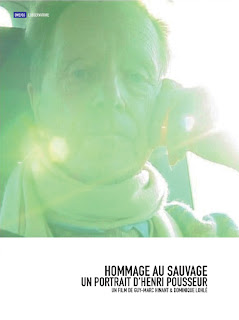 A few years ago, Belgian composer Henri Pousseur donated all of his papers to the Paul Sacher Foundation in Switzerland. For his fourth trip to deliver his archives, he was accompanied by filmmakers Guy-Marc Hinant and Dominique Lohlé. The resulting documentary, Hommage au Sauvage, was released on DVD by Sub Rosa's video branch, OME. Most of the film is Pousseur seated in the back seat with the camera fixed in the same position, talking about various topics from the history and theory of the avant-garde to his views on aesthetics and the open work. Most of the chat relates to his music, although he also recounts a few personal moments of special significance. There are some sequences filmed at the Sacher Foundation, going over some of his papers with the archivists. What comes across most vividly in this 52-minute film is Pousseur's engaging personality and his incisive attitude.

Four interludes present his music directly. Two of them use selections from his electronic works Scambi and Trois Visages de Liège with a succession of images. There's a longer section of Pousseur rehearsing a very short string quartet (Piccolo Ricercare, about 2.5 minutes long) and its performance by the Quotour Musiques Nouvelles. At the time of filming, this was Pousseur's most recent work, and the rehearsel fragments illuminate the melodic aspects of the piece that were so important to him, but often easily lost in the abstractions and the angles.

I've written before about Pousseur's approach to open works, and the filmmakers get some interesting discussion about one particular problem, how to make an open work for more than one musician. One of Pousseur's solutions was the piece Les Ephémérides d'Icare 2, a 1970 work for unspecified soloists and ensemble. For the fourth musical interlude, he goes over a few pages from the score, then provides commentary from the old LP recording (unfortunately not reissued on CD).

The DVD, which is available as a purchase from the usual suspects or as a rental from Netflix, comes in both NTSC and PAL formats (on each side of the disc) and unfortunately has no extras. Archival footage of his musical theater would have been most welcome, or a moderately restored version of the ensemble work Les Ephémérides d'Icare 2 together with its score. In any event, another nice addition to the Pousseur legacy from Sub Rosa.
Posted by Caleb Deupree at 2:31 PM No comments:

Outside the inside piano 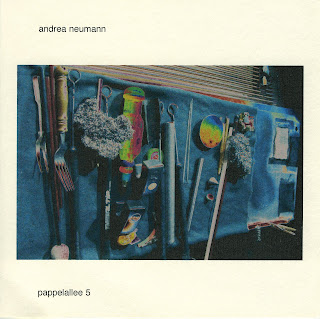 My instrument, the piano, with its twelve equally tempered notes per octave, has a critical historical role in the foundation of the underlying harmony and melody of most music that we hear today. So I take special notice of artists who use the piano to undermine these lofty aims, a challenging task that generally relies on the performer moving away from the keyboard and exploring the inside of the piano. With the advent of electronics and amplification, it is possible to distort significantly the familiar piano sounds and attain non-pitched noise on the instrument. The exemplar here is David Tudor's 1967 recording of Cage's Variations II using the inside of the piano and contact microphones. Perhaps because tradition is so hard to break, or because the keyboard repertoire for piano has so many masterpieces, few musicians have deviated and truly rethought the instrument and its possibilities.

One such musician, who now works entirely inside the piano, is Andrea Neumann. Based in Berlin, Neumann has been working this unusual perspective for over a decade, devoting herself enough to commission a special instrument without keyboard, dampers or pedals, reducing the instrument to the frame, strings and soundboard. Unfortunately I can't find a picture of her modified piano, but on nearly every recording the mixing desk gets equal billing, so it probably has a fair amount of circuitry built in. She participated in a flurry of improvisational group outings at the beginning of the decade but has been largely absent from the EAI recordings in the past few years, despite numerous live appearances at festivals around Europe. Recently Absinth Records released her second solo effort, a numbered edition of a single piece, Pappelallee 5 (the name of her studio).

Pappelallee 5 is a natural extension of Neumann's only other solo, a mini-CD entitled Innenklavier released in 2002. Innenklavier (Inside Piano) has three pieces that explore the instrument's range, from single plucked notes with varying degrees of feedback to rolling scrapes that fill the audio spectrum with unpitched noise. The second piece in particular directs noisy rasps and crackles to different channels, alternating with stretches of digital silence. The silence/noise dichotomy of course goes back to Cage as well, but Pappelallee 5 extends Innenklavier 2 by using room ambience, ordinarily a flavor of silence, as a defining compositional element. Neumann's studio is in a house mostly occupied by musicians, so room ambience includes audible traces of her neighbors at practice. Room ambience changes independently of Neumann's inside piano, providing a secret depth best appreciated on headphones where one's own room ambience can be minimized.

The crux, however, is Neumann's gestures on the inside piano, which bring focus to multiple levels of background. Sometimes subtle and sometimes extending into wild, dramatic squalls in crystalline relief, they contrast sharply with the muffled appearance of the conventional instruments. Guitar, flute, trumpet and acoustic piano all pass through, a melodic counterpoint to Neumann's electronics that sets the piano's tonal and melodic history traditions outside and down the hall. Placement in the mix adds significant levels of complexity, audible splices adding richness and texture. Neumann plays with audio artifacts that most engineers try to discard, and in so doing has created a dazzling piece of contemporary musique concrète.

Pappelallee 5 comes in an oversize gatefold package and includes a statement from the artist. It is available from ErstDist or directly from absinthRecords, and is limited to 300 copies.
Posted by Caleb Deupree at 5:36 PM 1 comment:

The July issue of furthernoise.org has my review of an audio-visual album entitled Elements by the Melbourne-based sound artist Abre Ojos.
Posted by Caleb Deupree at 7:09 AM No comments:

With great sadness for the missed opportunities but immense appreciation for her serene and peaceful music, I note that Danielle Baquet-Long of the duo Celer passed away yesterday.
Posted by Caleb Deupree at 8:43 PM No comments:

How long is your sentence?

From a call for submissions:

If your work is accepted, we will then request a three-sentence bio…. We prefer your bio sentences to be more Hemingway than Foster Wallace when considering length.