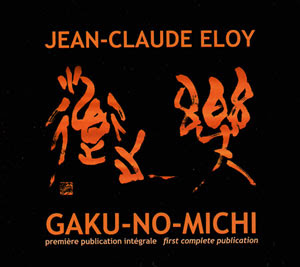 Jean-Claude Eloy's epic electronic work Gaku-no-Michi has long been on my short list for drone classics. Composed at the NHK Studio in Tokyo (like Stockhausen's Telemusik) in 1977-78, the 1979 double LP was one of my favorite electroacoustic works from my first hearing. But the four sides were only an excerpt, somewhat less than half of the total. Nevertheless, they grew in stature through its early inclusion in the Avant Garde Project (RIP) and its re-release on Creel Pone. Eloy and I had a brief email exchange several years ago where he informed me that a complete version was in the works, and it finally appeared late last year. The focus changed significantly with the restoration of the missing material, adding many more voices and concrete sounds into the greatly improved sound mix, revealing the epic dimensions of the work. In addition, Eloy made various liner notes available as PDFs in both French and English on the label's web site, including an excellent description of the piece and various technical credits.

Eloy started out with more straightforward compositional output, with works for orchestra and larger ensembles. Pierre Boulez released a recording of Eloy's 1963 piece Equivalences with his Domaine Musical Ensemble, and Eloy also studied with Stockhausen during the 1960s. In the turbulence and dissatisfaction of the late 1960s, Eloy sought inspiration outside the European avant-garde, and his first major electronic work Shanti ('Peace' in Sanskrit) uses concrete texts from Sri Aurobindo, Mao, and Eldridge Cleaver, and meditation sounds related to Indian, Tibetan, and Japanese voice forms. Shanti led to an invitation from the electronic music studio at NHK-Radio, Tokyo. Three extensive visits and 1200 studio hours later, Eloy produced the four-hour "film without images for electronic and concrete sounds," Gaku-no-Michi, with the title roughly translated as "The Ways of Music," or "The Tao of Music."

Although the piece isn't meditation music in the strict Zen or Yoga sense, the long sections of slowly evolving tones put the listener in a deep, reflective state. This was especially true for the vinyl release, which favored the contemplative second part with two of the four sides and skipped the more chaotic third part entirely. Tokyo, the opening section is represented on vinyl with what Eloy identifies in his notes as the third phase, a continuous dense and teeming mass of electronic sounds. But in the complete version, we hear what precedes as an inquiry into Japanese sound, overtly thematizing the geography much more intensely than the excerpts I've known before. Similarly, the last major section Kaiso is represented on vinyl with the long sequences of the first part. In the complete version, the sustained sounds that close side four continue to the readings from the annual Hiroshima ceremony in French, English and Japanese. This sobering sequence is the upbeat to the work's final extended lament.

The restored material provides a completely different narrative shape to the piece, way beyond the suggestions from the previously released excerpts, thereby providing a more substantial meaning for the "film without images." The vocal interludes alter the pacing completely, from long extensions to a nearly immediate comprehension. The Japanese sound inquiry from Tokyo, for example, moves from an abstract section to a slow voice intoning "what is...", but in an accent so that the possible meaning is deferred. Not until the transitional section is complete and we hear a different voice asking "what is, for you, Japanese sound?" with lots of ambient noise, as if the interrogator is taking a survey on a street corner. The answers from the crowd are drowned back into Eloy's modulated electronics, but the moment remains pivotal in a shifting perception of time. The vocal interludes provide a different modality beyond time perception and a static mode of being, interspersing an active, participatory focus through everyday, spoken language.

Despite the album's proclaimed completeness, a concert performance of Gaku-no-Michi has some unusual features that the CD release doesn't try to duplicate. To encourage a more focused listening experience, Eloy constructed an electronic prelude, interlude and postlude that play continuously before the concert, during an intermission, and after the concert, events presumably cued with lights and that discourage applause. The CDs don't artificially segue into each other, but present each major section of the work as a complete track (the opening prelude Pachinko gets its own track, but the interlude and postlude are blended with their antecedents). Even without the concert experience, the CDs stand alone very successfully and should restore Gaku-no-Michi to its leading position for electroacoustic music as well as the beginning of a long overdue retrospective for its composer. Eloy has also released the complete version of his other completely electroacoustic piece, Shanti, and has projected releases for electroacoustics and soloists. The Eloy CDs are available in the US from Mimaroglu and Erstdist; at the time of this writing, they are not available legally as a download.
Posted by Caleb Deupree at 6:18 AM