My iTunes library reached 20,000 tracks this week with the addition of Black Sleep by Jasper TX, alias for the Swedish musician Dag Rosenqvist. A while back, I wrote about the Polish composer Michael Jacaszek, whose album on the Norwegian microlabel Miasmah was at the time only available electronically at Boomkat and Thrill Jockey. I was pleased to see that Miasmah releases are now available at emusic, so I celebrated with a continued exploration of the music from this fine label.
Posted by Caleb Deupree at 11:21 AM 1 comment: 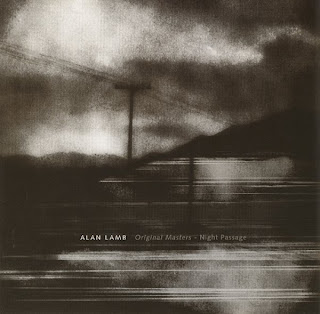 Decaying telephone poles in the distant Australian outback, a desolate landscape, populated only by a few scraggly shrubs and an unrelenting wind. Into this forsaken desert, I imagine an intrepid scientist with portable recording equipment, capturing the sounds of the wind and the wires before the whole structure collapses into dust. Thus I have always pictured Alan Lamb, a biologist who made a couple of albums for the Australian label Dorobo back in the 1990s, primarily using telegraph wires. Conveniently, the album cover artwork was suggestively vague, which left me free to imagine recording circumstances that were probably wildly distant from the truth.

Long string instruments by necessity are semi-permanent installations, and a few artists have made them a specialty. In the US, the most well-known practitioner is probably Ellen Fullman, who has been building and performing on such instruments since 1981. In Europe, Paul Panhuysen has been mining some of the same territory, and down under, Alastair Galbraith. All three artists build their own instruments, with the strings attached to some kind of resonator. Lamb is unique as far as I know to construct instruments outdoors, with the wind being a primary (although not exclusive) performer. Most of his recorded work uses a stretch of abandoned telegraph poles that he purchased from the Australian telephone company, christening his instrument the Faraway Wind Organ, on which he made recordings for nearly twenty years before the wires were vaporized by lightning and termites devoured the poles. His recordings were not as simple as putting up microphones to record the wind. He attached contact microphones to every possible surface, capturing ants and spiders walking on the wires, cows brushing against the poles, and eventually interactions of his own devising. He built massive bows for the wires, which he has described, but without providing any photographs.

His first album, Primal Image, was released in 1995, containing two Faraway Wind Organ pieces from the late 1980s. The title track, 29 minutes long, is both a gradual unfolding of various natural processes and a catalog of the different sounds available from the wind organ. There's too much volatility to be considered a drone piece, although I don't get any sense of a narrative either. Considering that the wind organ is in the outback, there's not very much environmental sound, a few passages of wind and a very occasional bird call. Sounds fade in and out, and there are a number of percussive events that sound like zaps from a nocturnal ray gun. Continuous low hums blend with piercing high frequency bursts, mid range shimmers, and one passage of fearsome ringing sirens. Its companion, a 1986 piece entitled Beauty, is a much more tranquil affair. The zaps are still present, but quietly in the background like a distant electric crackling, focussing more on overtones fading in and out, lingering aftertones, and sometimes a stretched out modal melody in the upper ranges. Lamb explains in the liner notes that the wires are so long and thick that the fundamental is beneath human hearing, so the overtones in our audible range create second-order frequencies that compete for harmonic dominance. They remind me of the audible equivalent of northern lights.

In a strange sequential turn, remixes from his second album by Ryoji Ikeda, Thomas Köner, Lustmord and Bernhard Günter preceded release of the originals by nearly two years. When the "original masters" of Night Passage appeared in 1998, there were three tracks, two recorded on the same Faraway Wind Organ that he had used for Primal Image, and a very recent one recorded live on an installation at the site of an electron accelerator in Japan. As on Primal Image, the title track is wild and chaotic, but with more enviromental noise than any of the other pieces. The wire vocabulary has expanded from the first album to include a multitude of interwoven scrapes, crashes, whistles, rumbles, creaks and clicks, often layered with a deep harmonic underpinning. The second piece, Last Anzac, is a complete contrast, a slowly evolving exploration of intense spectral frequencies, with infrequent percussive interruptions and ringing high overtone pulses. The final track is SPring 8 from a temporary environmentally sensitive installation, commissioned by the Japanese government to remind us to "venerate Nature and her primal forces no matter how far technology progresses." Lamb's performance on a great bow was recorded live, and ranges from rattles, metallic clicks, booms and scrapes to a rich display of dancing overtones. The Meditation on SPring 8 is the most harmonic piece on the two albums, both a summing up and vision of future possibilities.

The compositions from two different wind organs is the primary reason that I selected Original Masters: Night Passage for the drone classic, although both albums are superb. The original CDs are long out of print, but may show up as downloads. A few short works have been included on anthologies which are available both at emusic and iTunes. Lamb continues to work with installations around Australia, both solo and in collaboration with other artists and musicians, but sadly few recordings of these installations have been released. A joint effort with Dave Noyze is documented here, and includes a detailed description of the instruments, a couple of photos, and an hour-long recording which displays some of the flavor, if not the grand scope, of the telegraph wire instruments on these two recordings.

Long wire instruments are unusual and spark listeners' imaginations simply from the scale of the instrument. Lamb's outdoor installations combine this fascination with a primal connection to the environment, too often displaced in an urban museum setting. The half-hour durations of his albums' title tracks are immersive, even though they are spliced together from hours of recordings stretched across several weeks. Telegraph wires present enough of a story to further the images, without revealing too many performance secrets. Despite the rugged outdoor environmentalism inherent in Lamb's installations, the music stands on its own, a reflection of mysterious natural processes that confront us when we step away from the urban world long enough.
Posted by Caleb Deupree at 10:20 AM 6 comments: