Not much gets done during a summer in Tucson. It's just too hot. Repeated days of triple digit temperatures encourage reflection rather than action. And last Sunday morning, I enjoyed simply sitting and listening to one of my guilty pleasures, Otto Klemperer's 1961 recording of Brahms' Requiem. So it's taking me more time perhaps than usual to work through music books. Besides the Parmegiani book that I've already mentioned, in between fluffier reading I straggle chapter by chapter through John Tilbury's truly massive biography, Cornelius Cardew: A Life Unfinished. Tilbury's writing is complex, detailed, and thoughtful, but refreshingly absent is the convoluted style that I often find in academic publications.

Cardew played with the seminal inprovisation group AMM from 1966 until around 1971. Tilbury's chapter on this period describes the morality of AMM performances, a term I seldom encounter in a musical context with the more typical lofty ideal being spirituality. In connection with the type of improvisation practiced by AMM, Tilbury cites Cardew's seven virtues that a musician can develop: simplicity, integrity, selflessness, forbearance, preparedness, identification with nature, and acceptance of death. The first five make sense in the context of an improvisation group like AMM, where everyone contributes equally to an overall sound texture. But the last two? These look a lot more like prescriptions for living a certain kind of life rather than playing any kind of music, and their inclusion in the list casts the other elements in the same perspective. Yet identification with nature underlies much of the music I like, even if it's composed in the studio. Music based on field recordings, drone and otherwise, arguably comes from an identification with nature, but composed music seems fairly distant. And how should one interpret an acceptance of death as a musical virtue?

Meanwhile, over at Post Classic, Professor Gann has a couple of recent posts examining his career in retrospect, and finds that in his mid-50s, all of his publications and compositions have not brought him any closer to the kinds of leisure-time goals that are probably fairly normal: travel, free time, kicking back with a drink and a smoke on the back porch. Athough my own personal odyssey shares virtually nothing with Gann's and I admire Gann for having more success in music than I ever could, I recognize the same sense of struggle through my 30s and 40s trying to figure out where my life was heading. Here I am, the same age as Gann, assessing the unavoidable fact of puttering through blogging and slowly developing music, but reveling in the personal discoveries. It isn't going anywhere, which is okay. But sometimes when I play piano, or even work intently on a computer piece, thoughts of past and future dissipate into a fully lived present. Perhaps an acceptance of death is the simple recognition that the pleasure that I take from musical practice, from listening and writing, is sufficient unto itself.

The Cardew virtues are on page 312 of Tilbury's biography.
Posted by Caleb Deupree at 3:30 PM 1 comment:

The June issue of furthernoise.org has my review of Eric Glick Rieman's Trilogy from the Outside. Rieman plays a prepared electric Rhodes piano, a unique instrument that combines the electronics with mechanical noises from the original instrument, a very interesting set of music. The review has links to Rieman's site and sound samples.
Posted by Caleb Deupree at 4:44 PM No comments: 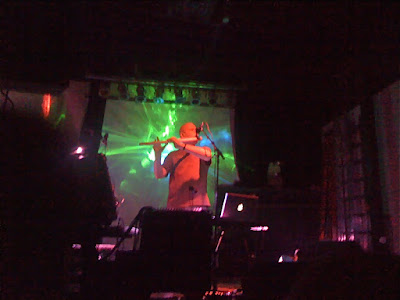 Tucson's Solar Culture Gallery had another great show last night, the ambient artist Robert Rich. He played a continuous 90-minute set with more rhythm than I typically associate with his music, many passages underpinned with a tribal beat, which must have been pre-programmed since I didn't see Rich make any action that would have produced drum sounds other than hitting a couple of keys on his laptop. His albums have often given me the feeling of a nocturnal jungle, with lots of small avian and insect sounds seething in the mix, and this feeling was enhanced by a bright green, continuously moving light show behind him. For the electronic part of his setup he had an analog synthesizer from Synthesis Technology, a couple of keyboards, a small Apple laptop, and a mixing board. He would use these instruments to set up different kinds of textures, which became the ground for his lead instruments: a variety of flutes (perhaps constructed from wood, but some of them looked like PVC pipe) and a pedal steel guitar, both plucked and played with an ebow. Having seen him perform, I can now recognize these instruments on his other live albums; they are all over the three-CD set of concert recordings Humidity, for example. On a couple of occasions, he played brief interludes on exotic percussion, including a waterphone. Solar Culture has a superb sound system, so the music was at the right volume, loud but not deafening. The gallery is in Tucson's warehouse district, with train tracks close by, and he even incorporated the train whistles into the set. He chatted around the merch table before the show and was happy to answer questions afterwards, very pleasant and easy conversations. This was a memorable concert, and 2010 is shaping up to be a great year for live music.
Posted by Caleb Deupree at 4:24 PM No comments: 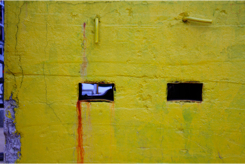 Enrico Coniglio is based in Venice, Italy, where he trained as an urban planner, and his music has deep roots in his environment. I reviewed one of his collaborative works a while back, and this year he released Songs from Ruined Days digitally on the Touch sublabel Spire. At first glance it seems like an odd alliance, since Coniglio's only traditional instrument is the guitar and Spire is all about the pipe organ. But Coniglio is operating here as an aural observer, composing this 45-minute work from field recordings, some of which include a pipe organ. Songs from Ruined Days is a poignant indictment of commodification and the resulting dilution of cultural identity, where the pipe organ acts as a symbol of the paradise lost.

The origin of Songs From Ruined Days is a collection of field recordings from industrial sites and cathedrals, both of which Coniglio sees in a state of crisis. The industrial samples feed into deep, buzzing drones with a full sonic spectrum, an aural equivalent of a dense fog through which we occasionally hear incomprehensible voices and other traces of human activity. Sometimes sustained organ tones underpin this fog, materializing quietly, merging into slow melodies and hushed harmonies. Sometimes, it's just static, atmospheric crackles and the oscillation of distant traffic. But three times out of this haze emerges unadulterated liturgical music, startling in its clarity, beauty, sadness and tradition.

These interludes of sacred music bring a sense of holiness to the music, yet these songs are as ruined as the industrial wasteland that surrounds them, corrupted by human frailty and unable to offer any spiritual nourishment. The pipe organ plays a hymn in the first interlude, faintly accompanied by its congregation. The reverberant space around the organ informs us that we're in a cathedral, and we should have a massive choir celebrating in song. Instead, a few voices, out of tune and out of sync, struggle to carry the message. The second interlude is for a choir alone, but they emerge from street noise and transient conversations, a distant rehearsel punctuated by air brakes and other industrial noises. Choir and organ join in an offertory in the final interlude sequence, the organ setting up a beautiful, clear chorale to the Virgin Mary, Kyrie Eleison and a concluding organ postlude. Even here, the liturgical music is overlaid with conversations and street noises, the sound of nobody paying attention. Lord have mercy indeed. 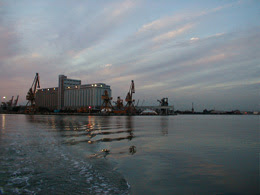 Songs From Ruined Days isn't Coniglio's first piece dealing with the environmental state of the Venetian lagoon and its surrounding industrial park. Field recordings from the factories show up in Abibes, his podcast for Cronica, and the pollution in the lagoon a subtext in Sapientumsuperacquis, a podcast for Touch Radio. Listeners shouldn't be surprised that some of the drones in the earlier work bear more than a passing resemblance to this one, but the overt symbolism of the liturgical music moves Songs From Ruined Days away from a pure ambient work and into a class of its own.

Songs From Ruined Days is available as a 320 kbps mp3 download directly from Touch.
Posted by Caleb Deupree at 2:32 PM No comments: