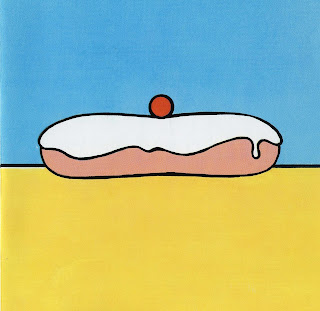 While virtually all of the albums in my occasional drone classics series have been painstakingly composed over an extended period of time, it is of course not uncommon for artists to perform and compose drones on the fly. One strand of drone performance stems in part from the live electronics work from the 1960s: Cage and Tudor, Stockhausen, and collectives like AMM. Keith Rowe, tabletop guitarist of AMM until 2004, since the late 1990s has found a different set of musical collaborators playing a style of music known as EAI. Groups with stable memberships are rare in this circle, but Rowe has dueted with Toshimaru Nakamura on four different albums since their first pairing on 2001's Weather Sky.

Nakamura plays an instrument of his own invention called the no-input mixing board, where no external sound source is connected to the inputs of the board. This is not to say that there aren't various effects connected to the outputs, but its basic vocabulary is carefully modulated feedback. It meshes well with an instrument of Rowe's invention, the tabletop guitar. Descended from the electric guitar and still capable of producing notes that remind the listener of its ancestry, it spills across the table with acoustic and electronic preparations, plectrums, and even other sound producing devices. Each of them independently developed an aesthetic of stillness and an acceptance of accidental sounds that has found different manifestations over the last fifteen years or so.

Weather Sky was recorded on June 11, 2001, at a theater in central France, two long tracks framing a short one in the middle. Each of the three eponymous pieces (Weather Sky #1, #2 and #3) is anchored by a steady drone. Unlike many drone works, the steady tone emphasizes high frequencies and both acts like a canvas for other textural events often composed from tiny fragments of sound spinning an elaborate sonic pirouette, and as a magnet for surrounding high frequency noise generated by Rowe's shortwave radio. #1 tops out at forty minutes, but is held together through the occasional appearance of an abrasive squawk that pierces its way through the layers of atmosphere. Rowe seems to aim his shortwave for static textures based on the infrequent appearance of recognizable sound objects, but sometimes this piece seems like a meditation on the various sections of Stockhausen's Hymnen with the exploration of shortwave textures and the squawks that seem so otherwise out of place. #1 builds from a quiet beginning through a couple of significant texture changes, culminating for the last third in a brighter, louder texture, strident and absorbing. It ends with suggestions of feedback leading suddenly to a nocturnal, flickering above distant shortwaves.

#2 is only five minutes long and begins abruptly, an excerpt from a longer improvisation that has clearly had time to gather steam. It opens with a much thicker sound than anything in #1, a climactic moment and its aftermath as the alarms lose energy, replaced by static, out of which emerges various cross-rhythmic clicks, metronomic dance music hiding in the fog.

The final piece starts with as beautiful a textured drone as one is likely to find. Its surface placidity and subaquatic activity bring to mind a pond in an urban park, where the distant industrial rumbles make themselves more felt than heard. Set in this shimmering wash is a dazzling timbral melody that moves from pulses to percussion, splitting frequencies in fractalized gestures. As with the other two pieces, a constant drone runs through the whole piece, merging sometimes with overtones from ominous low drones like circling airplanes as the texture thickens with deep growling bass noises. Shortwaves return toward the end, forming a background for spattering clicks in the rhythm of the beginning of a rainstorm. A stroke of temple bells and the texture immediately thins to a series of monolithic static pulses.

Weather Sky is a formative moment in what Rowe's biographer-in-progress Brian Olewnick called "the drone-oriented work he was prone to in the first half of this decade." Indeed, I hear an underlying entropy in some of Rowe's music, as it tends towards a turbulent chaos, with raw gestures mingling with electronic murk. But his drones, composed of shortwaves and static, shimmer, suggesting mysteries lying behind. Their second studio album together, 2005's Between, includes an exquisite and seamless interplay of overtones in the track Amann that closes the two-disc set. All of Rowe and Nakamura's duo work, which also includes live sets from 2002 and 2008, is released on Erstwhile and is still in print, available directly from there as well as from most of the usual suspects.
Posted by Caleb Deupree at 10:59 AM

Thoughtful piece, new light on a release I have heard many, many times. Thanks, Caleb.