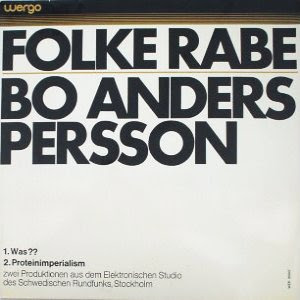 Back in the vinyl days, the Wergo label was a treasure trove for new music fanatics, and for a while I picked up everything on the label I could find. One of these Wergo releases was probably the first drone record I ever heard, a split record with two productions from the Electronic Studio of Swedish Radio, Stockholm, Folke Rabe's Was?? (What??) and Bo Anders Persson's Proteinimperialism. Each piece occupied one side of the LP. Both pieces are long and static and date from 1967, but they sound much less dated than most electronic works from the period, and completely different from the usual Darmstadt-oriented Wergo productions.

Persson's work is more of a loop experience than a drone, although it ends up sounding a lot like Alvin Lucier's landmark piece I Am Sitting In A Room. Inspired by the work of Terry Riley, the piece is basically the two words "imperialism" and "protein", strung together and run in a loop for twenty-five minutes, subjected to layering, reverberation, echo, various filtering and other sundry sound altering devices that were available in 1967. Although the words are comprehensible at the beginning of the piece, they mutate into its resonant frequencies by the midpoint, becoming clear again by the end. 1967 was an extremely political time, and Persson chose the words in response to imperialistic food practices from the big Western grain companies.

In the late 1960s, Persson was the guitarist in a trance-rock group Pärson Sound, whose long drone jams recall the classic krautrock groups Faust and Can. Live recordings from 1967 and 1968 surfaced a few years ago on CD, also available on emusic. Pärson Sound evolved through a few other incarnations to end up as Träd, Gräs och Stenar (Trees, Grass and Stones), whose glory years were in the early 1970s but who still concertizes periodically. In the last decade or so, they have played to support guitarist Oren Ambarchi and Japanese freak-out group Acid Mothers Temple, touring with the latter in Japan. Persson, born in 1937, has recently retired from the band that occupied so much of his musical energies. Proteinimperialism was his only foray into sound composition, and is unacknowledged on any of the web sites relating to Persson's rock bands.

Rabe's piece is a more pure drone, and for various reasons, has had a more favorable reception history. For one thing, Rabe was more active in electronic and classical music than Persson, serving on the staff of the Swedish Institute for National Concerts and the Swedish Broadcasting Corporation for more than thirty years. He plays jazz trombone and operates as a freelance composer, with several choral, instrumental and symphonic compositions to his credit. He also toured What?? at various times over the years, and in 1997, Dexter's Cigar, a reissue label curated by David Grubbs and Jim O'Rourke, reissued the piece on CD. The reissue included not only What?? its original form, but also a half-speed version, and therefore twice as long, that Rabe used occasionally in performance.

At first hearing, What?? moves in similar sound worlds to Eliane Radigue. Both composers use electronic sound generation to maintain a purity of tone that is completely different from field recording drone artists like Michael Northam and Jonathan Coleclough. They are both from the same generation (Radigue born in 1932, Rabe in 1935), and they both have connections to the early state-sponsored electronic music studios in Europe. Both composers examine miniscule changes unfolding over long periods of time and were inspired by such practices in non-Western music. But while Radigue's work focuses on meditational aspects, Rabe's work, while not oblivious to the peaceful nature of the results, is specifically harmonic, melding enharmonic partials to reinforce their inner hierarchies and produce certain sonic illusions. Each overtone in What?? is individually composed, resulting in a shimmering mobile of sound, climaxing in a glorious chord that fills the harmonic spectrum, with the higher partials gaining prominence for the first time in the piece. The half-speed version operates like a fractal, permitting a closer examination of the details in the original, but at the same time exposing a completely different set of sonic crevices.

Since the original Wergo LP is long out of print, the Avant Garde Project has released Proteinimperialism in lossless FLAC format on a compilation of Swedish electronic music. What?? is available directly from Dexter's Cigar as well as other online vendors such as Mimaroglu, Aquarius, or Forced Exposure.
Posted by Caleb Deupree at 2:36 PM

What?? is possibly my favorite drone album ever. Great review! Now I need to find a copy of Proteinimperialism; it sounds right up my alley.

Also, I just downloaded Cathedral from the archive.org and will be giving it a spin this afternoon. :)