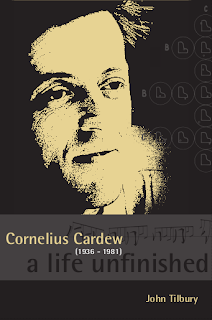 Christmas morning I finally finished John Tilbury's Cardew biography, Cornelius Cardew: A Life Unfinished, having saved the final, political years for my third extended session with the book. In the 1970s, Cardew turned away from the avant-garde music that had gained his reputation, and began writing more populist music that would be useful in mobilizing the troops for the imminent revolution. Most of his energies during his final decade were for the Communist Party of England (Marxist-Leninist), a Maoist organization (despite its name) until Mao's death and almost immediate repudiation in 1976. He wrote songs for the Party and fielded a couple of big commissions to exercise his compositional muscles, but otherwise his musical efforts were directed to performances at party congresses, rallies, and strikes. Tilbury speculates that Cardew had reached the highest levels of a revolutionary group whose threat was taken seriously by the British government. Enough suspicious and unresolved details about his death in 1981 from a hit-and-run accident remain for Tilbury plausibly to suggest an assassination.

The earlier observed thematics of Virtue and Morality reach a culmination in Cardew's work writing songs for the Party. The interplay between warring tendencies in his aesthetics, music as individual creation or music with a specific purpose, is a central theme of the last decade. When Cardew first became involved with the CPE (M-L), the Scratch Orchestra was still active, and Cardew and others in the group wanted to use performance occasions to further a revolutionary cause. The debate over to what extent music should be subservient to the Party line eventually led to songs with lyrics whose political line made no concessions to poetry, or even singable diction. But to proclaim the primacy of individual creation is to fall back to bourgeois ideals, promoted by capitalism to ensure that any opposition is diffuse and ineffective. Cardew combated this tendency in his art music by composing to a strict agenda, even in his art music. The large piano set of the Thälmann Variations, for example, was programmatically based on the life of proletarian hero Ernst Thälmann, and Cardew considered diverging opinions to be pointless rubbish. "You've got to get to the heart of things and find out what actually is the case. And when I play this music I'm saying to you what actually is the case.... Nobody is going to tell me any different" (850). If it were generally true that only the composer's intention mattered, I'd probably stop listening to music. The Party's struggles to accommodate Beethoven are at once illuminating for an example of its Jesuitical tendencies and opaque for what the discussion revealed about Beethoven.

Composer's intention, form vs. content, and especially music's relationship to external events, all of these aesthetic discussions were dominated by Marxist-Leninist politics. As the Party sought to understand, and eventually to manipulate, how music affects people, Cardew actively engaged these issues, and the choices he made in response carried life-altering consequences, both for himself and for people in all walks of life, not just other musicians. Tilbury was Cardew's contemporary, born the same year and sharing many of the same musical and political activities, making him perfectly placed to observe and report. Both men grappled with their aesthetic choices, with all of the ambiguities that come with the long-term engagement that is our lives. Tilbury expresses the uncertainty of the turbulent times that he shared with Cardew, writing entire paragraphs in the interrogative, seeking perspectives on the correct line to take on whatever issue was at hand. The ambivalence comes from a fellow traveler, the sense of companions growing older together, the intertwining of Tilbury's trajectory with Cardew's. Tilbury articulates the ambivalence without judgment, accepting with respect the individuals involved, the different strata of emotions that place us on our specific path. He identifies his own inner relationship to Cardew and the Party being neither stable nor consistent over the decades that he worked on the book, and thankfully he didn't try to make them all conform in a final grand stroke of editing. Tilbury is an ideal chronicler, close enough to the subject to have traveled many of the same roads, yet able to maintain a distance, sometimes ironic, always sympathetic. The detail and reflection together give the book its heft, but I have read no other book that describes what it means to be a musician as well as this biography.

The Party's struggles with Beethoven start on page 860. Tilbury's meta-reflection starts on page 978.
Posted by Caleb Deupree at 10:22 AM 2 comments:

Sound toward the light 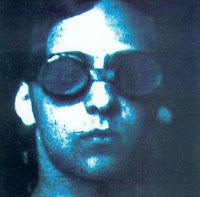 René Daumal was a mystic and writer in interwar France, a fertile time for the imagination even if it was highly unstable economically and politically for most of Europe. Born in 1908, his early years most famously included a bit of drug experimentation, specifically inhaling carbon tetrachloride, which gave him a glimpse of a higher reality. Although he later renounced external stimulants, he spent the rest of his life searching for the spirit that he glimpsed in his trances. In the late 1920s, he and a few friends created a literary group, Le Grand Jeu, parallel to the surrealists but eventually diverging over Daumal's more spiritual aspirations versus Breton and surrealism's engagement with Marxist politics. After exploring several religious traditions, Daumal found a home with Hinduism, learning Sanskrit well enough to translate some of the sacred texts into French. His spiritual work eventually led him into the circle around G. I. Gurdjieff, whose disciples were Daumal's teachers until his death from tuberculosis in 1944. In addition to many poems and essays, Daumal also published a novel in 1938 entitled A Night of Serious Drinking and left a second novel, Mount Analogue, unfinished. Published posthumously, it later became one of the sources for Alejandro Jodorowsky's allegorical film The Holy Mountain. Sound artist Michael Northam's most recent release, Solar Night on C40 cassette from the Malaysian label Mirror Tapes, is directly and overtly inspired by Daumal. This isn't the first time Northam has cited Daumal for his music. More than ten years ago, Northam's collaboration with John Grzinich The Absurd Evidence was named after a book of Daumal's essays. The album included as an epigraph "tem gwef tem gwef dr rr rr," the unpronounceable word that Daumal heard in his mystical trances immediately preceding the recognition of eternal truths. On Solar Night the significant quotation is from one of Daumal's early prose poems, given in French on Mirror Tapes' site and recited in English in the music. The texts are set in a passage describing the reversal of the speaker's perceptive faculties, which enables him to see the true world that lies hidden behind the encircling daylight existence.

In many works Northam's primary source material is field recordings, and so with Solar Night. In addition, some of the sound sources are from Northam's live performances during the summer of 2010. I imagine Northam's performances to be similar to Jeph Jerman, who performed in Tucson last winter, and years ago with Northam, and — small, natural objects, rattling and rustling into intricate environmental textures. Remarkably, when I listen to Solar Night, I hear the spontaneous performances, rooted in active and direct communication, quite clearly amidst the various layers. In fact, I thought that there was less processing of the individual layers here than on most previous Northam works. The field recordings, such as the ferocious weather in Bathing in the Golden Wrapper, were detailed and crisp. Other layers seemed to have a more human agency behind them, so I could imagine that it was produced live, in real time. Inevitably, some layers resisted such anthropomorphic fantasies, but I listened to them all the more attentively for the ambiguities.

Solar Night is released only on cassette, with two tracks making up the episodes that comprise each side. Episode A opens with the aforementioned Bathing in the Golden Wrapper, the stormy field recordings subsiding into a watery swamp, getting its complexity from the layering. The first Daumal quotation leads into the second piece, Mask of the Sun, a gentle resonant drone, full of delicate bells and flutes, boundaries between natural and processed completelly blurred. But there's a fire crackling away in the background, more or less audible throughout the whole piece — here we are, sitting around the campfire in the woods, enveloped in Northam's unearthly performance.

Episode B opens with a walk through a Tunnel passing through environments both natural and perhaps not so much. Accompanied by birds and insects, flutes and bells, the walker's steps parallel Daumal's spiritual journey, toward the light. Insect sounds are especially prominent, dancing through the field that needs to be heard on headphones to be truly appreciated. The last piece, Sonorous Skin, sets up a watery nocturnal environment that provides the background for an intense electronic loop, the most alien sound on the tape so far. The album closes with a second Daumal reading, "i am the seer of the night an auditor of silence a silence dressed in a sonorous skin."

Although all four pieces work with shimmering, continuous textures, Northam ends them fairly abruptly, with little twists that open the pieces outwards rather than simply drifting back into nothingness. These endings give the pieces a lift, leaving the listener more suspended and aware. Like Daumal, Northam is embarked on a spiritual journey, for which Solar Night is not only a demonstration, an immersive invitation to find the light behind the natural world.

Solar Night is available directly from Mirror Tapes. Daumal's portrait illustrates this online translation of one of Daumal's essays.
Posted by Caleb Deupree at 1:48 PM No comments:

Sad news today that Don van Vliet, aka Captain Beefheart, passed away. I was a Zappa fan, and Beefheart sang Willie the Pimp on Zappa's first solo, Hot Rats, which rapidly became my favorite song on the album. Zappa had also formed two labels, Straight and Bizarre, and I picked up everything they released. One of earliest releases was Beefheart's monument, Trout Mask Replica. If this was Straight, I couldn't imagine what was released on Bizarre. Even Beefheart's other albums don't sound anything like this one. 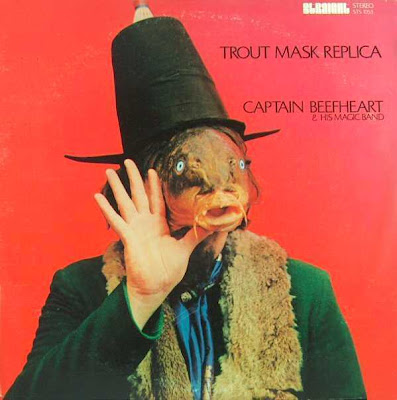 The December 2010 issue of Furthernoise.org was published today, and it includes two of my reviews, both featuring Australian music. The first is a review of Gail Priest's Presentiments From The Spider Garden, an extended web of unanticipated exotic territories formed into a long suite. The second is an overview of the first four releases on the Melbourne label Vicmod, which together show off the possibilities of modular synths old and new.
Posted by Caleb Deupree at 2:07 PM No comments: