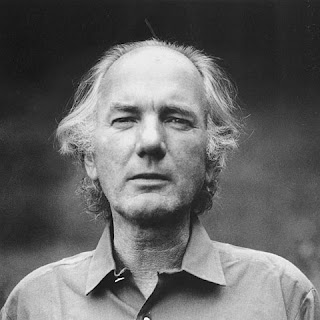 Many years ago, I picked up a couple of books by Austrian novelist Thomas Bernhard, a poet of despair whose bleak outlook is second only to Samuel Beckett. Over the past few months, I've pulled out his memoirs of his early years, Gathering Evidence, reading each of its five sections as an antidote to both more whimsical crime novels or more focused music theory works. Although Bernhard's prose doesn't have the same experimental syntax as Beckett, with complete sentences and correct grammar, his works have no breaks for paragraphs or chapters, a long unbroken ramble over a few obsessive topics. A lot like drone music.

Bernhard wrote often about music, and, according to Gathering Evidence, he was a reasonably good bass with consideration at one time of becoming a professional singer. One of his novels, The Loser, is about a budding piano virtuoso whose life and career were ruined when he heard Glenn Gould play the Goldberg Variations, seeing therein a level of perfection to which he could never hope to attain. In another, Concrete, the protagonist is a musicologist struggling futilely to write a book on Felix Mendelssohn. So I don't consider musical comparisons to be entirely fanciful.

Gathering Evidence was originally published as five separate volumes, covering only the first nineteen years of his life. Each volume is bitter against his family and Austrian society around WWII (the book covers the years 1935-1950 or so), with plenty of bile for the medical community as well, as he spent his teenage years in a sanatarium for lung disease, misdiagnosed and surrounded by ineptitude of all kinds (plus ça change...). His ongoing attempts to gather evidence about his existence, despite fruitless efforts to learn from his family about his origins, leads to a rigorous self-examination of his motives and prospects. More successful than his eponymous loser, Bernhard elevates his rancor into an uncompromising indictment, as we know from Bernhard's biography as a successful, if controversial, writer.

Sometimes I look for parallels between the creative arts. Certainly several musicians have drawn parallels between static music and Mark Rothko's paintings, and I also see many of the same qualities in Bernhard's prose and drone music. An essentially static art, with small variations within the wide stream, Bernhard's drones start and stop in the middle of nowhere and never move very far from their origins. His obsession with relatively few themes, setting them in motion one against another, compares with how drone artists construct their work in layers, with different elements given local prominence. Even in his memoirs, he was really only able to change scenes by writing a new book altogether — the five books were only collected in translation, and were only available separately in German. In the past, I compared Bernhard to Bach, not only for the elliptical references to Gould, but because his themes are so intricately intertwined. But Bach's tonal harmonies and devotion to God are very different from Bernhard's shades of gray, and it's very difficult now to find in Bernhard any shades of reverence or emotional fulfillment.

Where drone music doesn't follow Bernhard, of course, is the bitterness and anger. Drone music is seldom so raw; even in its most low-fi examples, it produces a blur, a haze where clear distinctions are washed out, sanded away. Other music expresses anger and rage very well, but at the moment current events produce enough stress. I calmly accept drone music as a refuge, and turn to Beckett and Bernhard for the bracing purity of their indignation.

The photograph of Thomas Bernhard is copyrighted by Erika Schmied, and is taken from one of the German-language Bernhard memorial sites.
Posted by Caleb Deupree at 2:35 PM 2 comments:

A few remarkable events in the outside blogspheric world that I inhabit. First, followers of drone and related musics probably have run across the Absurd label, run out of Athens, Greece and documenting many well known artists over the last decade, always in very small releases. Recently Mr. Absurd has started a blog where he's putting up some of the original Absurd releases, from CD-R and cassette, all long out of print. His most recent entry is one of Michael Northam's, From Within the Solar Cave, released in 2001 in an edition of 500. On the noisier side, it's a great release showing Northam's geologic sonic layering, and well worth a listen. I don't usually have pointers to download sites, but since this is the label owner making his otherwise extinct materials available, I figure it's okay. Browse through his blog archive, there are many other related releases that might hold some interest.

Second, about a month ago, fellow blogger Brian Olewnick kindly included your humble servant in a post about blogs he deemed worthy of general consideration. One of the bloggers that Brian admired but excluded for posting paucity was Richard Pinnell, who runs the Cathnor label, home of various releases that deserve their own notices. Richard has risen to Brian's bait, resolving to write a post every day for at least a year, and has been true to his word for several weeks now. The Watchful Ear has thoughtful essays about the music that Richard has heard during the day, often with links to freely available releases. His posts have become a highlight of my daily blogosphere rounds, and I have added The Watchful Ear to my blogroll.

Finally, back in 2007, several members of my family took a resolution to take a photograph every day and post it on a web site. Each month was devoted to a different theme, and for a while I had links to all the sites here. My wife and I stopped in 2008, but this year, one family member (the only professional musician) is recording a sound a day and posting them on his blog, as well as having a branch of his label's site devoted to the project. It started as pure field recording, but now has expanded to little loops from his studio, and is a brief reminder to stop and pay attention to the world around us. Also worth following, so I've added Taylor to the blogroll as well.
Posted by Caleb Deupree at 2:45 PM 1 comment: 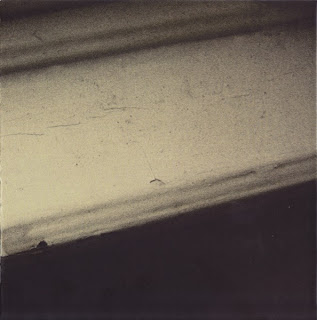 One of the first CDs that arrived in 2009 was from the Ohio label Infraction, a collaboration between two Russian musicians called No Traces. Alexander Ananyev records here as Sleepy Town Manufacture (he also has a couple of Infraction releases as Beautumn), and he pairs here with Stanislav Vdovin, recording here as Unit 21.

One difference between No Traces and the Beautumn albums is that the former is a continuous piece of music, whereas the Beautumn tracks are separate from each other. Although No Traces has tracks and titles, the connecting material is so strong that the listener has the impression of a single piece. Another difference is the presence of extended samples, more like quotations. The first track, Athena, includes a wordless female vocal line singing a melodic fragment that wouldn't be out of place in a hippy beach epic, and the second track, Blooming Woods, does the same with a flute. Solitude has some dialogue, probably in Russian or at least, not a language I recognize.

But these aspects pale next to the most striking element of this album: massive amounts of vinyl noise. It is considerably more prominent here than in turntable artists like Philip Jeck, more comparable to the bruitiste approach of Martin Tétreault, who cut records apart and glued pieces of different ones back together. The scratches open up a world of contradictions, whose play generates a sense of wonder about the project as a whole. Ananyev has used scratches before, most significantly on the long Beautumn track Blanket, released on the Top 40 netlabel in 2004 and reissued as a limited bonus disc with the Infraction release Northing in 2006. But where the crackling on Blanket is fairly chaotic, perhaps like a fire or rain drops, No Traces uses vinyl unabashedly. It appears in a loop, like vinyl; the scratches aren't clean, but have that unique vinyl crunch that comes from really dirty records. But No Traces was only released on compact disc, a format touted for its pristine sound (and the vinyl noise here is rendered in stark, crisp detail). And the title, No Traces, is completely incorrect for the highly audible traces of worn-out grooves, neglect and decay that pervades the album. The lavish artwork reflects this general decomposition. In addition to the cover photos, five cardboard prints on heavy chipboard stock all in various shades of brown, macro photographs of empty rooms: baseboards on the cover, a floor corner littered with plaster chips, other photographs so washed out as to be unrecognizable.

Behind all this detritus is gorgeous, slow ambience, sometimes melodic, sometimes nearly static, sometimes with little percussive embellishments. Gentle throbbing drones struggle to escape the crackling. Deep chordal bell sounds combine with loops, perhaps nighttime field recordings to create a subdued ethereal atmosphere. But the crackling is an integral part of the music, synchronized to the extent that I would check for skips if it was an LP. The overall effect is a bit disconcerting, a slight unease between the ambient music and the sounds of decay, an effect often achieved in more subterranean releases, and all the more welcome here for the uniqueness of the total.
Posted by Caleb Deupree at 10:30 AM 1 comment:

Sad news of the passing of Max Neuhaus yesterday, one of the first great new music percussionists, and an early performer of Cage, Feldman and Stockhausen. There's a very nice obituary in the Houston Chronicle.
Posted by Caleb Deupree at 4:46 AM No comments:

I have two reviews in the February issue of furthernoise.org: Interbellum's Over All of Spain The Sky is Clear, on FSS; and two independent releases by RP Collier, Lamallaphone and Deconstruction of Twilight.
Posted by Caleb Deupree at 6:01 AM No comments: