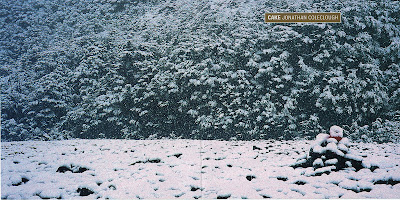 Jonathan Coleclough is one of the names most often dropped when vendors seek comparisons for drone artists. A search for "Coleclough" at the wonderful San Francisco record shop, Aquarius Records, returns 130 hits, but Coleclough himself has released only six full length solo albums and about that many in collaboration. At Aquarius, the remaining hits are all in descriptions for other artists (e.g., "fans of Coleclough should definitely check this out"). While part of this attraction is simply mystique, Coleclough's beautiful and often pastoral soundscapes are a preeminent combination of field recordings with electronics.

One of Coleclough's other characteristics is that his pieces generally exist in multiple versions. It's fairly common in today's digital world for artists to release remixes, but Coleclough takes this further than most. His most recent release, Torch Songs, a collaboration with Andrew Liles, is available in two editions: a double LP, and the same with a CD of additional material. Both were released in editions of 300. A 2006 collaboration with sound artist murmer was released in three different versions: the standard edition CD of 700, the standard plus a bonus CD of 200, and a standard plus bonus plus a unique bonus CDR (i.e., every instance of the edition has a different third item), released in an edition of 47. This isn't a recent phenomenon; Coleclough's first solo album, Cake, released in 1998, had a second version released four years later, with virtually identical packaging, down to the label serial number (the booklet was the same, but turned inside out). He must have planned for the alternate release, as the inside cover of the original release has the album and title perfectly placed for the alternate cover.

The original version of Cake is a very quiet affair. Starting with a series of untreated field recordings, there is an initial buildup that sounds like a processed piano, climaxing in a metallic swoosh that launches a long decaying resonance that takes nearly half of the piece. From the near silence at the mid point, Coleclough slowly builds the piece back to its initial sound level. Underlying most of the piece is a deep bass drone and a slow undulation in the upper registers, while the field recordings mutate into electronic versions of the same. In some ways, it's similar to the centerpiece of Olivier Messiaen's monumental pianistic Catalogue d'Oiseaux, La rousserolle effarvatte, which represents a complete nocturnal/diurnal cycle, including the silence of the birds at midday. Cake presents a similar cycle, from the complex initial events to the central tranquillity and back.

The alternate version bears some similarities in sound materials, but the shape of the piece is nearly reversed. Both versions have an underlying deep drone, a slow undulation, and various segments of field recordings. But instead of having loud points at both ends of the piece, the alternate builds from a near silence to a center which is quite loud. Coleclough uses feedback and complex overtones and nearly buries the deep drone. Instead of wispy little birdsongs, there is a regular refrain of chittering, a continuous insect-like noise that is absent from the initial version. The whole piece has a completely different shape in the alternate version, which leads to questions about the identity of the piece.

Although I played Cake regularly when it first appeared, my fascination grew significantly when the alternate version appeared. I've expressed an interest in this blog in mobile forms, a technique that classical composers such as Henri Pousseur and John Cage used in the 1960s and 1970s to enable a variety of sound pieces from the same score. Generally, electronic musicians don't release "alternate versions," they release "remixes," which extend the life of a piece, typically a pop song, through emphasizing other elements from the original. I've always wondered whether there is some ur-Cake sitting around Coleclough's studio, a master version, or even a score, that precedes both releases.

Sadly, Cake is no longer available through any legitimate channels. The original version was released in an edition of 500, and the alternate version in an edition of 300. One can only hope that Coleclough follows the example of his colleague, the British drone artist Paul Bradley, whose label has a digital store that sells various out-of-print releases. In the meantime, Coleclough's site has a freely available download of a long radio piece, One hour as sixty million years, a gorgeous, slowly evolving drone 'based on data about global sea level changes over the past 248 million years.'
Posted by Caleb Deupree at 8:04 AM

the art of memory said...

this is a great blog, came across it looking for more info on the mysterious coleclough.
comparing it to the Catalogue d'Oiseaux is very nice indeed.