Musique Concrète for the Eyes It's been a while since I last reported on the gems I've found inside Netflix that travel the same waters as yours truly. And I've found a nice one, My Cinema For The Ears, directed by Uli Aumüller and featuring mostly Francis Dhomont and a bit with Paul Lansky. The film's continuity and direction come from watching Dhomont work on a piece entitled Another Spring, which was released in 2003 on Dhomont's album Jalons.

Another Spring takes off from the Spring concerto of Vivaldi's The Four Seasons. Each concerto in Vivaldi's set has an accompanying sonnet printed in the score, sometimes as a suggestion to the performer, sometimes a propos of nothing in particular. Dhomont parses the Spring sonnet for all the references to things that make noise, then he captures the various sounds and uses them in his composition. One of the sounds that Aumüller follows is the "barking dog" allusion over the viola section in the score at the beginning of the second movement. So we follow Dhomont into the field, literally, where he captures a shepherd dog's bark, and back into his studio, where he blends the bark with the viola strokes in a commercial recording. After the Lansky interlude (where one segment is filmed with a doggie-cam), Dhomont has to persuade violist Jean René to create a savage sound, closer to nature. He uses the dog montage we're following, and Dhomont of course adds René's viola to become part of Another Spring as well. The last section of the film is an animation video by Robert Darroll with the completed piece as the soundtrack.

Around this skeletal continuity, we have a couple of extended conversations about composing, about using environmental sounds, which sounds are interesting or not, etc. These segments provide a conceptual framework perhaps for the uninitiated, and the two interlocutors, Christian Calon and Lansky, each bring their own perspectives.

The glory of the film, though, is the editing and more abstract sections set to works by Dhomont and Lansky. Parts of it recall Godfrey Reggio's Koyaanisquatsi, especially during Aumüller's urban montages. But the nature segments are vivid and abstract, using field recordings to retain the referent for the viewer or creating parallel transformations with the music. There are a couple of extended sections without dialogue where Aumüller gets very creative. The Princeton segment with Lansky and Dhomont having coffee is a virtuoso editing job, talking heads interspersed with clinking spoons and soundtracked with Lansky's Table's Clear, which was created with exactly these kinds of sounds.

It turns out My Cinema for the Ears was released on Bridge Records and is still in print. One piece by Dhomont (En Cuerdas for guitar and tape, not Another Spring) and three by Lansky are included on an audio-only page, all four pieces in stereo and all four available on other albums.
Posted by Caleb Deupree at 3:46 PM No comments:

Enrico Coniglio first came to my attention in his collaboration with one of my favorite drone ambienteers, Oöphoi (whose work deserves a couple of articles here, but another time…). He has been kind enough to keep me apprised of his work, and some time ago I received a couple of packages of CDs from him containing releases from different projects. Coniglio has deep roots in Venice, and he continues to project a strong sense of place through field recordings and album imagery. But through his work I have discovered a larger collection of ambienteers from Italy, a sense of place that comes from the community of musicians. 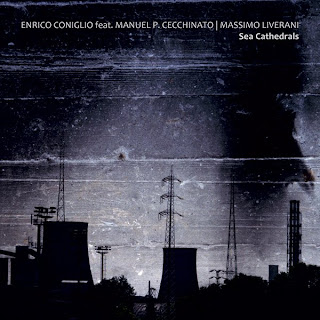 His release Sea Cathedrals on Silentes (an affiliate of the classic Italian ambient label Amplexus) is a collection of five drone works, ranging in duration from six minutes to twenty. His collaborators include his cover photographer Manuel P. Cecchinato playing crystals, singing bowls, and a custom-made analog synth with Paul Klee's Archangel drawing engraved on copper as its touchplate; Massimo Liverani on guitars, loops and treatments; and Manuela Bruschini singing wordlessly on the title track. The two tracks featuring Liverani's loops are the two shortest on the album, set in the middle between longer, more atmospheric works. On Till, a muffled phrase repeats with added resonance developing into little melodic fragments that gradually supplant the loop's original focus. Similarly, on The Lost Cargo, the resonance from a single crystal stroke slowly takes on a life of its own as overtone whistles trail into flute sounds. Coniglio's drones and field recordings provide a gauzy curtain around the loops and extend the album's continuity to the longer soundscapes.

The twenty-minute title track, which opens the album, combines isolated chords in a synth drone with single percussive strokes and processed (or perhaps electronic) seagulls. The drifting harmonies and languid pace that encircle monumental blocks of sound recall Debussy's sunken cathedral, a century-old parallel evocation of underwater temples. Sandbanks combines distant wavering microtonal clusters and processed crickets into a rich buzzing, propelled by arhythmic techno-style blips and a whistling reminiscent of the bird calls from the title track. Sylos, the album's closer, is another long stretch of murmuring drones punctuated with deep crashing events and layered with the album's most recognizable field recordings. Single bell strokes, like temple bells, introduce sections with cavernous voices, reverberating in a public space like a train station. Spacious and unassuming yet filled with tiny details, Sea Cathedrals is a release in the classic ambient framework, honoring varying levels of attention. 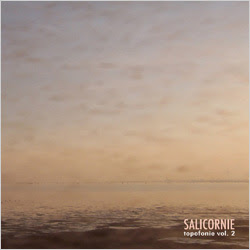 If Sea Cathedrals is Coniglio's pure ambient release, on the second volume of his Topofonie project, Salicornie, he indulges his romantic and melodic side. An extended paean to Venice released on the Irish label Psychonavigation, Salicornie is framed by the gorgeous title track, which begins with a gentle Debussy chords rocking back and forth, then features the breathy trumpet of Arve Henriksen, cello by Patrik Monticelli. The rhythm picks up, sounds familiar, and like a sudden parting of the curtain everything is accompanied by orchestral samples from Ravel's Bolero. This song could fit comfortably on softer mainstream instrumental radio. But the theme disintegrates back into hazy, languid echoes of Gershwin, which in turn become the background for a stroll around the Piazza San Marco, with tourists, strolling musicians, church bells. This in turn fades into "disintegration loops" from Nigel Samways, a blurry conclusion to the first four tracks. The theme from Salicornie later appears in an interlude led by Monticelli, and at the end with a full group calm and melancholic reprise.

The melodicism continues across the entire album, from the wistful chords on Alpen Tower pt. 2 (a continuation of a song from the first volume) as well as The Girl From Murania, a beautiful standalone piece which features Henriksen and Monticelli alongside of Coniglio's bent-note guitars and gentle percussive beats. This track, like the main theme, could easily be a strong candidate for radio play. But the field recordings aren't buried in the mix, as they are on Sea Cathedrals, they're prominently displayed. Fondamente Nova incl. 130 cm s.l.m. includes creaking wood and ropes from a sailing vessel that could fetch an unsuspecting, lulled listener back from the brink of slumber. Often the phonography is subordinate to the music, yet still communicating strongly a sense of place, as when the sustained, melodic synths of Bateon dei morti float on layers of water and sea birds. The combination of field recordings, ambient layers and romantic melodicism make Salicornie considerably more dramatic and conceptual than Sea Cathedrals, a more structured and post-classical side of Coniglio's music.

Besides performing and composing, Coniglio is also a curator of a collection of ambient tracks from various Italian musicians on the theme of Underwater Noises. Aside from Coniglio, most of the names are new to me, although I reviewed an album by Obsil for furthernoise.org a few months ago. There is a nice variety across the compilation, from Ennio Mazzon's dreamy rain-soaked drones to Cop Killin Beat's glitchy atmospherics and submerged loops. I liked Paolo Veneziani's Inside the Edge, where a thin melodic thread traverses a cavern of watery drips and rustling percussives. Obsil's sudden transitions between field recordings, squiggly electronics and poignant piano loops stands out from the sustained drones featured prominently on several tracks. Everyone's taste will determine which tracks will be the favorites, but I found the entire compilation very listenable throughout. Underwater Noises is a joint release between the Lost Children netlabel and Ephre Imprint, where it is available as a limited edition CD-R. My only complaint about the comp, a minor one, is that none of the web sites have links to the artists, which defeats one of the purposes of the collection.

To close this survey of Enrico Coniglio's recent work, let me also mention a composition of raw field recordings he recently made available on the Portuguese media label Crónica. Recorded with binaural microphones in one of Venice's Basilicas on a typical feast day, it combines random group noise, prayers and organ music as Coniglio wandered the crowd. The twenty-minute composition, in three parts, is available here as part of Crónica's podcast series. Check out some of the other pieces while you're there.

Sea Cathedrals is available directly from Silentes. Salicornie is more widely distributed as a CD and is also available as a download from all the usual suspects.
Posted by Caleb Deupree at 2:44 PM 1 comment:

The February issue of furthernoise.org is out, where I have two reviews: Chance Reconstruction by M. Ostermeier, a post-classical artist creating unusual work with piano and electronics; and the first volume of some nice droney Soundscapes from Edward Rizo. More info and links to the artists, plus other reviews and a new compilation of exclusive live tracks, at furthernoise.org.
Posted by Caleb Deupree at 4:30 AM 1 comment: