Settling back in after travelling involves finding various pieces of life and picking them up again. One of these pieces is John Tilbury's Cardew biography, which I've mentioned before. Needless to say, this wasn't a vacation book because of the FAA's continued enforcement of luggage weight restrictions. So this past week I've picked it up again, reading about the Scratch Orchestra, a semi-ragtag but seminal group which grew out of Cardew's irregular position teaching experimental music at the Morley College starting in 1968. Cardew was never an important figure for me in my early years, but the set of people who were involved in the Scratch Orchestra is truly astounding. Many of the composers who first came to my attention on Brian Eno's Obscure label, David Jackman (later of the drone group Organum), and of course AMM, were all there.

Besides the who's who aspects, I'm fascinated by the utopian nature of the Scratch Orchestra. Tilbury, who performed with the group, captures the essence of the freeform era, describing the travelling, the guerilla concerts, instrumentation made on the cheap (or even better, with 100% found objects), expressing a joie de vivre that made me feel that I was there. At the time, I was in high school, but even there I felt a loosening of the societal strings, a newfound freedom, that went beyond simply moving into young adulthood. Even at my school, in the four years that I went from grade 9 to 12, the dress code relaxed from a mandatory jacket and tie to nearly anything goes, which meant sandals and bell bottom jeans. Tilbury's prose brought all of this back.

But the late 1960s were also a time when revolution was in the air, even if its inevitability hasn't exactly turned out as foreseen. But I remember that too, even from my idyllic prep school enclave in upstate New York, followed by an Ivy League college elsewhere in New England (where I completely missed out on the opportunity to spend time with Christian Wolff, an encounter for which I clearly was not ready). Parallel to the Scratch Orchestra's freedom being eventually channeled (one might say curtailed) into a revolutionary rigidity of strict Maoism, their trajectory matches that of my own idols at the time, the French literary avant-garde group Tel Quel, whom I studied assiduously and who took the same route after a trip to China in the mid 1970s. I suppose that Maoism was eventually discredited as a solution. Even though the issues that Cardew and company faced haven't gone away, Tilbury's gift is that he makes the questions real all over again, almost forty years after the fact. Tilbury remains politically committed (he refused to concertize in the US after Bush's invasion of Iraq), and I look forward to reading how all this plays out.
Posted by Caleb Deupree at 3:06 PM No comments: 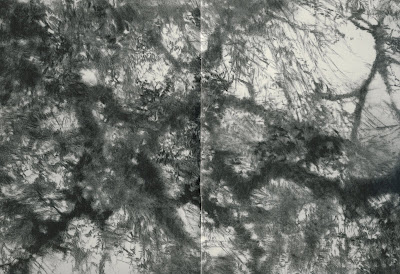 Brian Pyle's solo spinoff from the Starving Weirdos, aptly-named Ensemble Economique since Pyle played everything himself, released its third album this past summer, a gorgeous vinyl package in Amish Records' Required Wreckers series. Standing Still, Facing Forward moves away from the Ensemble's more industrial earlier releases, with a sound built up from bowed strings, winds and environmental recordings, overlaying slow melodic fragments to create thick vibrational textures. The vinyl format is an appropriate choice, as it provides the opportunity for two extended suites instead of the continuous sequence on compact disc, and each side has its own character.

Side one opens with With You, At Brandy Creek, a melancholic elegy played mostly on cello, multi-tracked into a dark and woody choir. Pyle avoids a classical sound by reducing the vibrato in his playing and using a sustained bowing, so the various melodic lines combine into a thick alluvium. The melodies themselves hover around a few notes and fairly small intervals, and the bass line plays in a steady dirge-like rhythm. He adds a little percussion on Chamber of Light, wind chimes over a surging tremolo in the cellos. The strings build into a rush of traffic and environmental sound, a resonant blast where the listener can barely pick a melody out of the wind. The final track on side one, Strangler Figs, is darker, with percussive crashes intermingled with rain, thunder while flutes hover around a minor second and the cellos weave a subliminal parallel.

Side two is considerably more ominous, opening with a ritualistic Angkor Wat, In The Mist. The strings from side one are replaced with brass, flutes and percussion, with prominent declamatory horns taking the foreground, restlessly circling around three adjacent notes. There's a very creepy bird, barking incessantly and persistently in its own robotic rhythm, while the whole piece is underpinned by surging metallic waves. The darkness continues with Night Escape On Water, The City In Flames, strings and percussion that build to a thunderous roar. The thick and close textures include various indistinct noises and strange overtones in the background as the plaintive melody summons disturbing cinematic images. The album closes with On The Threshold, Through and Through, where flutes and a sustained reedy notes struggle to be heard above environmental sound and noisy overtones before the piece quietly fades out.

Standing Still, Facing Forward is available digitally from the usual suspects, but the vinyl packaging is superb. It includes little information about the recording, but a lovely sixteen-page booklet of aquatic reflections in pencil by Stacie Jane Meyer, dark and murky images that visually parallel the music. It's available through various distributors, or directly from Amish.
Posted by Caleb Deupree at 11:45 AM No comments: 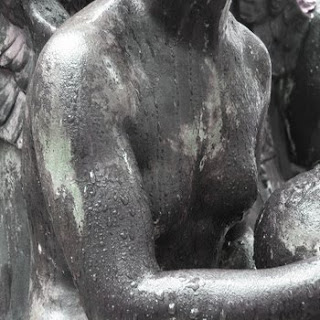 Back in the spring I reviewed a two-CD set by Brooklyn dronemeister Kyle Bobby Dunn purporting to be an introduction to his music, but if someone really wanted to approach Dunn's music from out of the blue, his more recent limited edition Rural Route No. 2 might be a better place to start. Dunn is originally from Canada, and this release is from an unusual source, a print shop and publishing house in Toronto called Standard Form operating on behalf of the Canadian art community, part of whose output is a series of three-inch CD-Rs in an ongoing Rural Route series.

Dunn places the two tracks on Rural Route No. 2 in spectral sightings from his Albertan childhood, and both pieces avoid his occasional noisy tendencies in favor of a dreamlike serenity. The first track, Dissonant Distances, is a fairly consonant and serene set of circulating drones, with nearly melodic frequencies moving in short fragments in the foreground. A quiet section has a ghostly echo, voices from the ether, maybe even distant pop radio, but disappearing in a rumbling resonance. The second track, Senium III, is oddly more dissonant, a series of alternating chords with strange and otherworldly overtones. It continues with regular changes every five to ten seconds, not really fast enough to be rhythmic, but a slow lullaby whose regularity is a sonic representation of the final period in our all-too-short lifespan. Both pieces have a soft focus, with wistful variations in brightness, memories that remain just out of reach.

Rural Route No. 2 is still available as a CD-R directly from Standard Form, or in digital formats from the usual suspects.
Posted by Caleb Deupree at 4:48 PM No comments:

The October 2010 issue of Furthernoise features two reviews of mine: Distances by Obsil and Cranes Fly West by Richard Lainhart. Lots of other interesting items too, including Alan Lockett's overview of the recent Thomas Köner reissues, including my drone classic Permafrost.
Posted by Caleb Deupree at 5:49 AM No comments:

Languishing in the sun 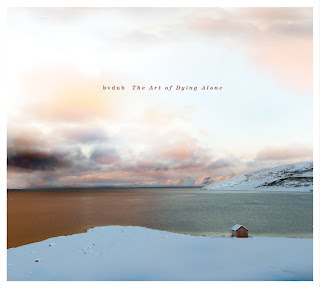 Over the past year I have reviewed three albums on Glacial Movements, an label from Italy that furthers the exploration of isolationist music. The label's most recent release is The Art of Dying Alone from bvdub, who DJed in some of San Francisco's deep trance and techno raves in the 1990s before relocating to China, where he worked as a translator and recorded this album. The artist's moniker derives as a nickname from his initials (Brock van Wey) and not from any overt dub influences on his music, which in this case is a spacious ambient album of gentle loops and sustained crystalline strings and voices.

At first listen, and despite the rather bleak track titles, I found it difficult to place this album in an isolationist context. The six tracks, ranging from eight to twenty-one minutes, are all very thick and lush, languid sustained string pads often underpinned with gently moving beats. I felt that I was in the tropics rather than the glaciers. The album's instrumentation is unspecified, but wordless ethereal female vocals give tracks like No More Reasons Not To Fall a light and fluffy feeling, white clouds on a sunny day. Van Wey builds the tracks gradually from short loops on guitar, voice or piano, accumulating layer upon layer swirling into a hypnotic soup. Nothing From No One starts from gentle piano meanderings set against the background rustles of a late-night, nearly empty bar, before the last gesture loops to an infinite repeat, sustaining sounds gradually filling the spectrum, yet the original seed remains at some level of audibility. A guitar loop in No One Will Ever Find You Here shows its seams with a slight rhythmic hiccup, which propels the music forward with a sense of urgency, always slightly ahead of itself.

The title track, which closes the album, is especially poignant. The female voice is especially prominent, from the sustained choral voices in the opening to a sighing solo briefly separating herself from the crowd. Unlike the other tracks, which proceed by accumulation, the chorus here is an introduction to a harp and voice duet. The voice here almost sounds like lyrics, dancing a slow elegy with the harp and piano. This piece gets thick too, but at its height the voice is still prominent with disembodied syllables, female sibilants almost sounding like banshees above the quiet piano and sustained pads.

With all of its layered profusion, The Art Of Dying Alone is a maximal sort of isolationism. Perhaps the album's cover provides a clue. As with the other Glacial Movements releases, it's a gorgeous photo by Bjarne Riesto, but it's the first time that a Glacial Movements cover has featured any kind of human trace, a lonely fishing cabin on the edge of a snowy inlet where the artist comes to make his last work. Van Wey has captured the wistful culmination of an imagination, dying alone in a land of midnight sun.
Posted by Caleb Deupree at 4:35 PM No comments:

Back from the journey 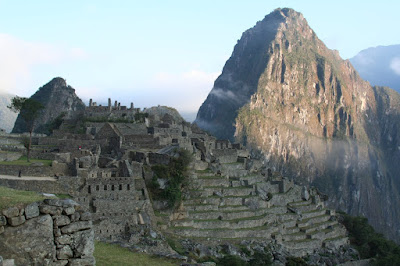 We've returned from our travels, two weeks in Peru with organized tours in the Sacred Valley and the Peruvian Amazon and a side trip down the desert coast with a flight over the Nazca lines. Besides the hundreds of photos to sort through and the treasured time at Macchu Picchu, we are especially grateful to the guides who showed us so much of their country, introducing us to local artists and experiencing, however briefly, a culture completely different from our own.

A stack of new music awaited my return, so music posting should return real soon now.
Posted by Caleb Deupree at 4:37 PM No comments: