Drones for the young 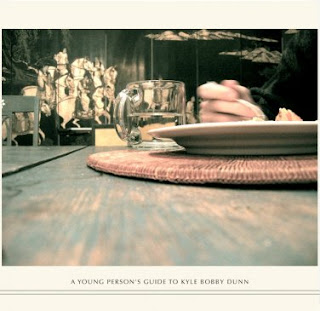 Astute drone followers will have already noticed Kyle Bobby Dunn from his early limited-to-150 release Six Cognitive Works on the Swedish label Kning, or more likely from Sedimental album Fragments & Compositions, released in 2008 and favorably reviewed in big international music media. Although Six Cognitive Works has an occasional noisy edge (Dunn put it in the genre Rock and added Death Metal to its styles in its Discogs entry — a wry exaggeration but there it is), the six surreal Fragments are reportedly composed from sourced piano and classical strings. His newest release, a double CD on Nottingham's Low Point ironically titled A Young Person's Guide to Kyle Bobby Dunn (Dunn was born in 1986, pretty young himself), further clarifies the harmonies behind the drones, setting up a serenity occasionally rippled with darker undercurrants. Like his Low Point labelmate Celer, Dunn's sources are typically acoustic and classical instruments, from which he composes extended slow drifts wrapped in lush harmonies.

The first four tracks in the YPG are a CD reissue of four (of five) tracks on his digital album Fervency, released in 2009 on Moodgadget. This collection of "aged guitar drones" locates its origins distant behind the processing, through the subdued rhythmic attacks that quietly drive There Is No End To Your Beauty and the strumming suggestions in Butel. The harmonies are largely diatonic and slow moving, but with extensive interplay in the overtones. Beauty's dual melodies seem like David Hykes' overtone singing, where two independent yet related melodic lines intertwine, while The Tributary (For Voices Lost) uses short melodic fragments, repeating and combining into islands of harmonic stability. Promenade shimmers with lots of high overtones as well before taking a weird turn into a watery swamp.

Like Fragments & Compositions, the remaining eight pieces on the YPG use real players on strings, horns, and piano for the sound sources, and these pieces divide between sustained drone works and two shorter pieces for piano and room ambience. On the drones, the sonic origins are never displayed so evidently as on the former album's Miranda Rights; perhaps violins are present on Empty Gazing: perhaps Bonaventure's Finest Hour contains horns. The border separating sounds from processing is more fluid here in Dunn's developing vision. The overtone counterpoint from the first disc is continued with revolving pillars of sound over a two-note oscillation in The Second Ponderosa and the warm, gorgeous and melodic horn calls in Bonaventure. The piano pieces, especially Sets of Four (Its Meaning Is Deeper Than Its Title Implies), have a similar structure to the drone pieces, and suggests how Dunn creates his music on stage in live performance.

Dunn's music has a serenity that comes from a languorous pace, melodic fragments over vaguely diatonic harmonies, and a bright shimmer over the whole sound, hiding some kinds of dissonance that never become threatening but peacefully coexist with the tranquillity. The solo piano recordings have an unsettling ambience from their low-fi recording quality, so foreign to the pristine goals of most classical artists. Pieces that start off in tranquillity veer into uncharted dreams. Empty Gazing's submerged voices and the dissonant low frequency feedback concluding The Tributary both demonstrate the presence of darker forces, calmly and from a measured distance. The album's darkest moment comes at the very end of the last track, The Nightjar. After nearly two hours of drifting bliss, Dunn plays a segment of dialogue from a film he made over a decade ago about a couple of hallucinating and unhinged private investigators. The dialogue will guarantee that nobody will use the second disc for sleep music more than once, and ties this collection to the more noisy Cognitive Works. Astute drone followers will pick up this Young Person's Guide (available directly from Low Point) and continue to seek out the fragmented compositions of Kyle Bobby Dunn.
Posted by Caleb Deupree at 1:43 PM 1 comment:

Furthernoise.org has published two of my reviews in the April issue.
Posted by Caleb Deupree at 10:53 AM No comments: 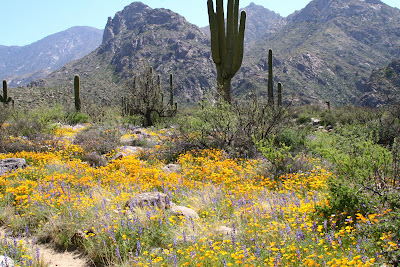 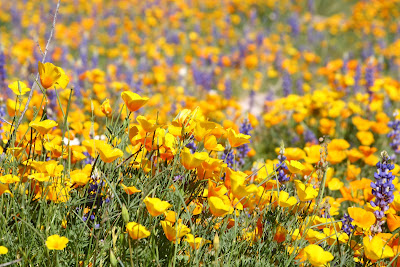 Sometimes I have to stop and admire the scenery. Southern Arizona has had a lot of rain this winter, so the wildflower season has been pretty spectacular. I couldn't decide which of the two photos to post, so here they both are, from the Sutherland Wash in Catalina State Park. The yellow flowers are Mexican Poppies, and the tall, spiky blue ones are Lupines, and the blue flowers on the shrubs are Desert Bluebells.
Posted by Caleb Deupree at 9:02 AM No comments:

One of the few criticisms that I had for Graham Collier's The Jazz Composer was that he didn't have much to say about contemporary jazz figures other than himself. Henry Threadgill was probably foremost in my mind when I made that remark. The Brooklyn Rail has a fine article by George Grella about Threadgill, with some depth in the discussion about his compositions (hat tip: Avant Music News). Grella mentions Threadgill's Society Situation Dance Band, criminally unrecorded, and suggests YouTube as a source. There's quite a traffic in Threadgill concert bootlegs, so intrepid googlers can find some pure audio documentation out there.
Posted by Caleb Deupree at 10:22 AM 4 comments:

A couple of things I didn't know about Erik 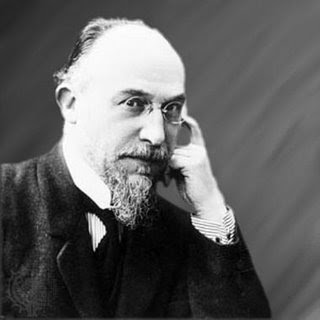 Some time ago, fellow blogger Brian Olewnick wrote about a weekend road trip accompanied by the entire five-CD Aldo Ciccolini recording of Erik Satie's complete piano works. This post contained a seed that, nearly a year later, has sprouted:

Something like the 4th Nocturne (still, gun to head, my favorite individual piece of music, as played by Ciccolini) utterly dies when pushed along too rapidly [emphasis added].

IMSLP only has the first three, so a few months ago I picked up a Kalmus edition of the Five Nocturnes based solely on Brian's enthusiastic and forceful recommendation.

My previous experience with Satie was extremely limited. I have an old cheapo-cheapo album of piano works targeted at beginning pianists, which had the famous three Gymnopédies and three Gnossiennes, but the rest were all a bit odd. I was rebuffed by the strange titles ("Golf", "Tennis", "Fishing"), the tempo instructions had all been translated into English, and in any event I wasn't able to make enough sense of them via sightreading to pursue. I wasn't much interested in the famous works either, having heard them too many times during a Windham Hill phase, long ago in my callow youth. Satie's furniture music is one of the milestone predecessors of ambient music. And I knew that Cage greatly admired Satie, and maybe a couple of anecdotes about the two of them. Not much else.

I read through the nocturnes, and the fourth got under my skin. For several days my brain wouldn't let go of the melody, sort of pentatonic and harmonized with perfect parallel fifths, bane of the classic voice leading teachings. The bass line underneath was equally beguiling, propelled by a strange melodic meandering unrelated to the primary tune. I would never have connected this music with the composer of gymnopédies or gnossiennes. Thank you, Brian, for singling this piece out.

The local university library had some books about Satie, and I picked Mary E. Davis's recent short introductory biography so I could create some context. Davis's biography is very readable, although I wish it had an index and a list of Satie's compositions. The famous trios were among Satie's first compositions, written in the mid-1880s when Satie was in and (mostly) out of the Paris Conservatory, while Satie lived a bohemian lifestyle and hung out in Montmartre cafés. The nocturnes were the last major solo piano works Satie composed, thirty years later, after World War I. In between, Satie went back to school, the Schola Cantorum, where in 1908 he graduated with a diploma in counterpoint. All five of the nocturnes are characterized by the same strange intertwined melodic lines, and I didn't know that Satie was lacking this training when he composed the early works.

The story of the genesis of Cage's piano piece Cheap Imitation is reasonably well known. In order to evade the copyright posse, who wouldn't let Merce Cunningham's troupe use the two-piano arrangement of Satie's ballet Socrate, Cage used chance procedures to alter sufficiently the melody and harmony of Socrate, but retained all the rhythms so Cunningham wouldn't lose his cues. I didn't know that Satie himself used similar procedures on more than one occasion. His early piano piece, the second of his Pièces Froides, is based on a well-known Northumbrian folk tune The Keel Row. More importantly, the central dance of his ballet Parade was a ragtime number based from an Irving Berlin hit, That Mysterious Rag. Here again, according to Davis, he reorganized the melodies following various formulas but retained the overall rhythm.

I still don't have the Ciccolini set that Brian extolled. The only Satie recording I have is a selection of the most famous piano works played by Reinbert de Leeuw, which got a couple of approving nods in the comments on Brian's post. In any event, it's been fun playing the nocturnes, and I'm encouraged to continue exploring Satie's compositions.
Posted by Caleb Deupree at 6:21 AM 4 comments:

Blogger hatta from the Spiral Cage is in Boston this week attending the concerts concluding Christian Wolff's month-long residency at New England Conservatory. His report, first of several, is here. Should be an interesting series.
Posted by Caleb Deupree at 7:43 PM No comments: