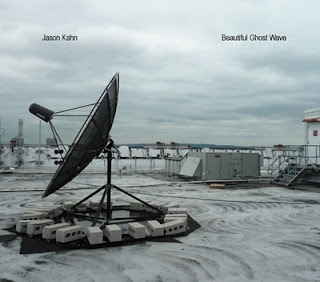 Goh Lee Kwang, who runs the Herbal International label, contacted me earlier this year with an invitation to review Jason Kahn's recent CD Beautiful Ghost Wave. I have a few CDs with Kahn creating fairly static textural improvisations using percussion and electronics with like-minded musicians Jason Lescalleet and Toshimaru Nakamura. My only prior exposure to his solo work is the opus for sine waves and room overtones, Miramar, another slow moving piece. Two realizations of his graphic piece, Timelines, are posted at his site, chamber electronics exploring slow textural changes. So I was unprepared for the ever-changing stream of static and analogue electronic noise that forms the building blocks of this work.

Chaotic roaring sounds, squalls of feedback, short waves and short circuits populate an ever shifting soundscape, never settling on one sound for very long. After a fairly chaotic opening, most of the transitions in the first third of the piece are in layers, where textures separate into component parts that fade in and out. When sudden transitions occur, it's almost always to drop out most of the noise, leaving some kind of quiet pixellation or simply a single tone without any background. Even amidst the roar, I found a delicacy in the sounds that is absent from a lot of noise music I've heard, overtones and activity inside the sounds, harder-edged rustles, even semi-melodic feedback.

Periodically Kahn makes audible movement around the space, footsteps and other ambient room noise. Even the opening gesture, an immediate attention grabber, includes a clatter that sounds like Kahn manipulating some strange tabletop bed of electronics. So I followed the suggestion, combined with his experience in improv, that this was in large part a recording of a live event (some transitions are too sudden and dry to be live). For the duration of the 37-minute piece, the pacing seems spontaneous, as the transitions lead into sound fields where he settles for a while, making micro adjustments, simultaneously crisp and indistinct.

Kahn generously provides liner notes for the piece on one of the CD's inside panels and at Herbal International, a welcome change from so much content-free packaging. My review practice generally dictates that I set such text aside until after several listens, so I was very surprised to read that the basic material for the piece was recorded over a year and then composed from sound files on the computer. He also mentions his deliberate dramaturgical intent, creating a sense of expansion and contraction as well as a feeling of open systems, where the music doesn't resolve but could continue well past the end of this particular physical manifestation. Indeed, the Wire magazine has posted a live version of the piece recorded early in 2011. Whether this tendency toward narrative is an anomaly in Kahn's output, or a signal of a new direction, it's a refreshing, bracing, and impressive composition.

A Beautiful Ghost Wave is available on CD directly from Herbal International as well as Erstdist.
Posted by Caleb Deupree at 3:55 PM 1 comment: