Three months after his passing, post-war composer Henri Pousseur finally got an obituary in the English-language media. The article mentions in passing a new project devoted to the composer, the Scambi Project at Middlesex University in England. Run by John Dack, a specialist in musique concrète, the Scambi Project is collecting documents relating to Pousseur's open-form piece for tape. Composed and described by Pousseur in the late 1950s, Scambi was intended from its inception to be a mobile form, and Luciano Berio made a version as well as Pousseur's more available realization. Part of the goal of the Scambi Project is to enable new realizations, and the site includes three new versions from graduate students in the Sonic Arts program.

The documents are a treasure trove for Pousseur enthusiasts, and range from scholarly papers by project team members to interviews and transcribed lectures by Pousseur from the last decade or so. His keynote lecture from an Open Work symposiuim at Goldsmiths College not only discusses Scambi, but also his Eight Parabolic Etudes in some detail. This collection of eight long works produced in 1972 (released on four CDs, also available at emusic and iTunes) showcases the possibilities inherent in analog electronic music, and were later reworked by electronica artists Oval, Philip Jeck and Main for a live concert and subsequent CD release.

I've documented by own enthusiasm for Pousseur here on a couple of occasions, and the Scambi Project is a welcome addition to the available material. I still hope for a CD release of Pousseur's piano music, which he composed throughout his career and which would make a varied and interesting recital.
Posted by Caleb Deupree at 11:08 AM No comments:

One of the most thorough electronic music packages I've ever seen is the boxed set of "The Complete Tape Music of Dick Raaijmakers," which includes three CDs and a 200-page hardbound book of bi-lingual (English and Dutch) notes explaining the pieces. The pieces date from 1959 to 1996, and although a lot of analog electronic music sounds a bit dated, I find Raaijmakers' work not only listenable, but very prescient. In particular, I am fascinated by a series of five canons from the mid-1960s, all of which sound much more like static or noise than any of their contemporaries. The canons are artifacts from some fairly intense research that Raaijmakers performed on sound morphology. While the research and its results are explained reasonably well in the book accompanying the CDs, I stumbled across a publication Cahier M from the Orpheus Institute seminars in Belgium, where he goes into much more detail in a series of four lectures subtitled "A Brief Morphology of Electric Sound."

Raaijmakers had two major guiding lights for this research, the artist Piet Mondrian and the pioneering photographer Étienne-Jules Marey. In the 1880s, Marey developed a photographic gun that planted consecutive actions in a single image, which he used to show real-world actions, such as birds in flight and a man jumping off a chair. Forty years later, as a major theorist for the Dutch artistic movement Neo-Plasticism, Mondrian advocated an electronic music structured into sequences of primary tones (characteristically identified as red, yellow and blue) and non-tones (chromatic, atonal noises, black, grey and white), devoid of harmony or any sort of romantic characteristics. From Marey, Raaijmakers took the idea of presenting a single object from multiple perspectives. From Mondrian, he not only took the tonal concept, but Mondrian's spatialization of sound, not merely the horizontal and vertical but a diagonal approach. Raaijmakers wanted to construct pillars of sound that could be viewed from any angle and whose characteristics would change accordingly. Mondrian's work fits into a long history of mixing sonic, visual and architectural metaphors. The 1960s were a fertile time for spatialization as well — think of the work of Stockhausen and Xenakis from this period.

Of course, canonic procedures were nothing new to the 1960s, having a long history back before Bach. But Raaijmakers started from a single point of sound, so short that no specific pitch could be perceived. He strung multiple points together to create larger sound structures, which he then overlaid with each other at different time scales, creating larger and larger blocks. Despite the increased complexity and the archaic titles in Latin, any canonic procedures he uses are largely inaudible, and the raw material sounds like static. Taking inspiration from Mondrian's severe restrictions, Raaijmakers' canons sound like the absence of music. The closest sonic resemblance is the crunchy parts of William Basinski's Disintegration Loops, harvesting the sound from old, decaying tapes. Raaijmakers's first canon serves as a model: spiky sonic aggregates alternating between two channels, without pitch, harmony or any discernable rhythm. Raaijmakers calls the second one a black-and-white copy of the first (it's a canon about printing, a copy of the first with reduced information). The third is accelerated, with the sounds overlaid to create timbral differences, but it is still an extremely restricted sound palette. The fourth is a subtraction canon, where increasingly large holes appear in the original material, again recalling Basinski. The fifth is based on an old LP of Edith Piaf, emphasizing the surface noise at the expense of the underlying sounds — it could easily pass for turntablist/looper Philip Jeck.

Starting from Mondrian's neo-plasticism, Raaijmakers ends up with a different view of sound than the moving horizontal and vertical waveforms that we see in most audio editors. Mondrian's sound had depth, a third dimension whose appearance (and audibility) altered depending on the perspective of the composer and/or listener. Repetition patterns which may appear orderly and periodic when viewed from one angle may be completely invisible or barely recogizable when perceived from elsewhere. The pattern may be altered, translated ("the shift of a given quality in a straight line with respect to other qualities"), until the pattern morphs into a new shape, a new pattern to be used for the next round of changes. Sound artist Ralf Wehowsky translated a single set of parameters for his album When Freezing Air Stings Like Ice, exemplifying Raaijmakers' deep morphological connections. Neoplasticism combined with Marey's superimpositions, and the resulting abstract, liquid forms anticipated Xenakis' architectural sound sketches and countless graphic scores.

Raaijmakers' work is available digitally, without the explanatory notes, from iTunes and emusic, but the book is a huge asset to understanding this pioneering work. Despite the collection's title, many of the more recent works are recordings of fairly theatrical productions, so enough is lost already without missing the explanations for the absent visuals.
Posted by Caleb Deupree at 10:25 PM 1 comment:

One of my earliest musical memories: in high school in a small town in upstate New York, the local variety store had a small area up front reserved for records, where a tenth grader, already with a penchant for the unusual, finds a striking album cover, a red face with wide eyes and very white teeth, mouth wide open, 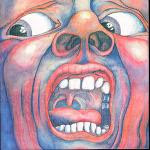 looking behind in fear, much more effective on the large 12-inch LP cover than its reduction to CD. There began my long fascination with King Crimson. Five albums over the next five years with five different lineups, save for the guitarist Robert Fripp, brought them to a core group whose album Larks' Tongues in Aspic remains one of the rock pinnacles. The drummer on this celebrated album, Bill Bruford, entered my awareness for the first time (I was happily oblivious to his earlier group Yes). Bruford remained with the mighty Crim through the three albums from the mid-1970s, then three terrific albums in the early 1980s, and even into the groups first incarnation in the 1990s. In between Crimson resurrections, he had solo rock albums, then ventured into jazz with his group Earthworks, which itself made ten albums with various lineups over the better part of two decades. I counted on Bruford to make quality music, no matter the surroundings, and followed him to unknown albums whose only recommendation was his presence.

So it was with some sadness that I read of his retirement earlier this year. But after all, he will turn 60 in 2009, which is a fine retirement age, and I certainly know from experience that at a certain age the hands stop doing what the mind tells them to do. 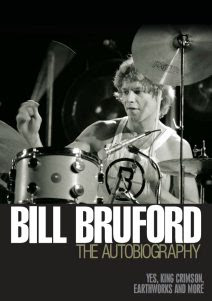 But Bruford, whose intelligence has manifested itself in interviews as well as his music, has published his autobiography, loosely in the form of a FAQ, as entertaining and frank a view of a professional popular musician as I've ever read. Bruford has had the good fortune to participate in full-time groups and one-off sessions in both rock and jazz, and his observations on the differences are astute, and not especially flattering to the rockers. But he also provides unusual illumination on the difficulties of maintaining a personal life (he remains married his adolescent sweetheart) and the trivial minutiae of maintaining a stable income as an independent creative performer.

Bruford is unafraid to examine his professional life in light of cultural studies scholars, from sociologists Simon Frith and Howard S. Becker to pop music theorist Richard Middleton. He even cites Chris Cutler, the drummer and theorist from Henry Cow who created a model of self-sustaining independent music with Recommended Records in the 1970s, and whose career makes an interesting parallel with Bruford's. Although he finally returned to an all-acoustic kit in the later Earthworks, in the 1980s King Crimson Bruford was virtually synonymous with Simmons electronic drums, and he considers his experience with them in light of Frith's work on storage and retrieval technologies. The inevitable mismatch between musician and audience appreciation of the musician's efforts becomes a validation of Becker's Outsider, participating in an insular community with loyalty only to other musicians (except when the band is falling apart).

Many of Bruford's admirers will doubtless come to this book seeking gossip on the powerhouse rock groups in which he served, Yes and King Crimson. While there's a bit of that, the autobiography isn't the National ProgRock Enquirer, and gossip mongers may be disappointed. (An excellent source for King Crimson history is Eric Tamm's monograph on Robert Fripp.) Much of the book is about the distinctly unglamorous work to maintain equilibrium for his chosen specialization, which is performing challenging, forward directed music in a group for a live audience. As such, his music is diametrically opposed to my own (solo, static, electroacoustic music created alone in my studio), but Bruford's insights about the frustrations and incentives to make music are an articulate comparison to Susan Tomes' book about performing classical chamber music.
Posted by Caleb Deupree at 12:55 PM 1 comment: